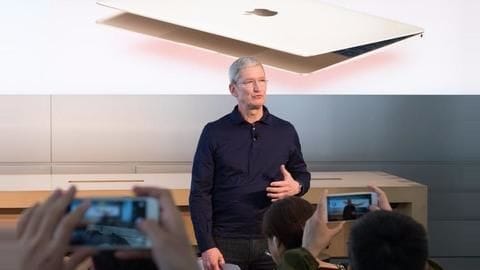 In a first, Apple CEO Tim Cook addressed the media for an India launch event for iPhone 8. The iPhone 8 and iPhone 8 Plus was launched by Reliance Jio's chief of strategy Akash Ambani with Cook sending his greetings via video conferencing. Cook highlighted the features of the newly launched phones. He concluded his speech by wishing everyone a 'Happy and safe Diwali.'

Do you know?
Availability in India

Apple is going to sell the iPhone 8 series today onwards, in India. iPhone X would be available from 3 November, along with the US and China. The starting price of Apple's tenth anniversary iPhone edition is Rs. 89,000.

Partnerships
Apple ties up with Reliance and Amazon

Apple has entered into partnerships with Reliance Jio, its sister arm Reliance Retail, and e-commerce giant Amazon for online and offline sales. Amazon and Reliance Digital would offer 70% buyback value when people upgrade to the next iPhones that would release in 2018. The partnership also ensures that iPhone owners stay as Jio users for the next year, paying Rs. 799 per month.

Buyback Offer
How to avail the 70% value buyback offer?

For availing Jio's buyback offer, people need to buy the latest iPhones either from Amazon or Reliance Digital. Customers will have to enroll themselves for an iPhone upgrade after 12 months, following which Amazon/Reliance Digital will return 70% of the iPhone 8/8 Plus cost. The concerned seller would adjust the price in the iPhones that release next year, giving customers a good discount.

iPhone 8/8Plus buyers will have to continue using Jio's Rs. 799 iPhone monthly plan till next year. Buyback offer is applicable only if the phones are exchanged from Amazon and Reliance Digital. Under the Rs. 799 plan, available for both prepaid and postpaid users, customers get 90GB of 4G data per month. Existing Jio customers can avail the offer by changing their current plan.