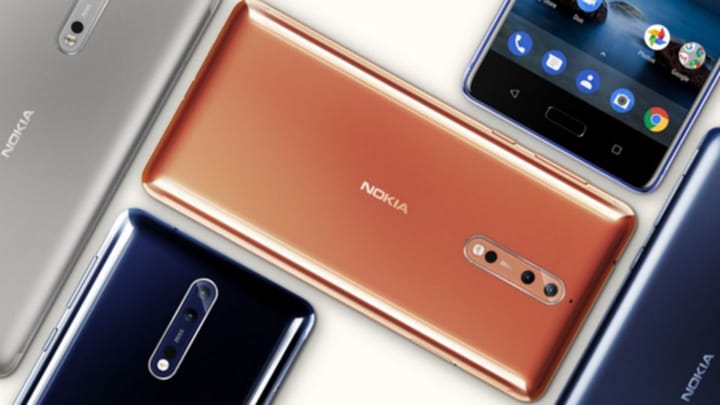 HMD Global has finally launched the Nokia 8, the brand's first Android-powered premium flagship smartphone, in India at Rs. 36,999. Nokia 8 would be available online exclusively on Amazon and also via offline stores. The online/offline sale would start on 14 October. The Finnish company had earlier unveiled the device in London on 16 August. Let's know what the phone has to offer!

What does Nokia 8 have to offer?

Nokia 8 has a 5.3-inch Quad HD display and a 2.5D Corning Gorilla Class 5 on top. It runs on Android 7.1 Nougat and comes with support for Android O. It is powered by Snapdragon 835 processor; it has 4GB RAM, 64GB built-in storage, and a 3,090mAh non-removable battery. It would be available in Polished Blue, Tempered Blue, Steel, and Polished Copper colors.

"To keep your phone working harder for longer, the design, innovation and engineering teams worked hand-in-hand. The result is a full-length graphite shielded copper cooling pipe that dissipates the heat generated by the high performing system across the full length and breadth of the handset."

Not selfies, take bothies with Nokia 8

The camera setup on the new Nokia 8 is quite interesting. The aluminum unibody phone houses three 13MP cameras: one front-facing camera and a dual rear camera. Nokia has introduced the 'Bothie' photo mode with which users can simultaneously use both front and rear cameras to capture images or videos. HMD has collaborated with Carl Zeiss for making the Nokia 8.

Nokia 8 comes with another exciting technology 'OZO Audio' for a fully-immersive 360-degree experience. Three microphones and OZO technology allow users to capture 360-degree audio in videos. The advanced spatial audio technology can record as well as playback spatial surround sound. The Nokia OZO Audio was reserved for the brand's futuristic Virtual Reality camera, but HMD decided to integrate it in the smartphone.

Nokia is attempting to regain its popularity by launching new phones and prove its products are noteworthy. It wants to beat other brands in the modern smartphone market, including Apple, Samsung, and Huawei. Though Nokia 8 doesn't disappoint, experts feel it is just an average flagship; the device is slightly underpowered for its hefty price-tag compared to competitors like OnePlus 5.