Kapil Sharma-Ginni Chatrath's New Year wish is all about love 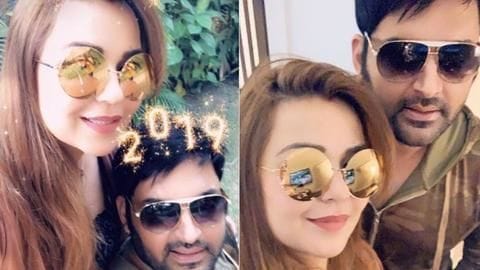 Who is Kapil Sharma's wife?

Kapil Sharma married his longtime girlfriend Ginni Chatrath. The lady is a comedian-actress who met Kapil during their college days in Jalandhar. Kapil and Ginni dated each other for a couple of years before tying the knot on December 12.

Where did Kapil and Ginni go for their honeymoon?

Kapil Sharma and Ginni Chatrath got married on December 12. While there were speculations about their honeymoon plans, the king of comedy postponed his honeymoon owing to his work commitments. Kapil was busy with his new show The Kapil Sharma Show which was launched on December 29.

Who is the producer of TKKS2?

Kapil Sharma, recently, made a comeback with the second season of The Kapil Sharma Show which is being produced by Salman Khan. According to the media reports, post the failure of Kapil's last show Family Time With Kapil Sharma, the makers vouched for new producers. That's when Salman came into scene to help Kapil.

What is the cast of 'The Kapil Sharma Show'?

The Kapil Sharma Show marks the reunion of the renowned comedians including Kapil Sharma, Chandan Prabhakar, Krushna Abhishek, Bharti Singh and Sumona Chakravarti. With such a cast, the show was meant to be a laughter ride.