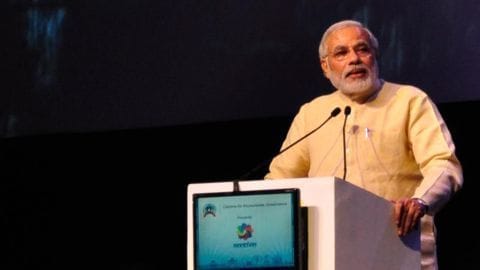 He called such fondness of publicity "inappropriate", and said that anyone who thinks himself "bigger than the system is wrong".

He also praised Raghuram Rajan for the service he has rendered to the nation and said "wherever he will work, he will work for India and he is patriotic".

Who is Raghuram Rajan? Raghuram Govind Rajan was a professor at University of Chicago before being appointed chief economist at the International Monetary Fund (2003-07).

He was the youngest to hold this position.

On 5 September 2013, Rajan became the 23rd Governor of the Reserve Bank of India.

In 2016, his name appeared in the Time (magazine) list of the '100 Most Influential People in the World'

Rajan received Fischer Black Prize, given by the American Finance Association in 2003 and his book, Fault Lines: How Hidden Fractures Still Threaten the World Economy, won the Financial Times/Goldman Sachs Business Book of the Year award in 2010.

Raghuram Rajan's hits as the Governor Brought global focus on the need for the West to limit its monetary policies from harming emerging markets.

Friction points between the Governor and the government Modi government wanted RBI to cut rates, boost growth to which Rajan agreed in over 8 months.

The government and RBI governor had friction over restructuring RBI. RBI wanted to appoint COO through circulars if government nominees were not present.

RBI protested against government's proposal for a law for an independent debt management office and the proposal was withdrawn.

Real cause of exit: Subramanian Swamy's attack on Rajan BJP leader Subramanian Swamy had attacked Rajan's policies claiming they were not for the Indian system.

He had demanded his immediate removal from the top post.

The Rajya Sabha MP had even presented a 6-point chargesheet against Rajan to PM Modi attacking the RBI Governor of leaking "sensitive information to the world". RBI Governor- Raghuram Rajan announced that he won't be seeking a second term as the Reserve Bank boss.

Dr Rajan in a statement said that he planned to return to academia upon the completion of his term on September 4.

Finance Minister Arun Jaitley said that the administration "appreciates the good work done by him and respects his decision".

P Chidambaram said "I am disappointed and profoundly saddened by the decision of Dr. Raghuram Rajan to leave the RBI...As I had said sometime ago, this government did not deserve Dr. Rajan. Nevertheless, India is the loser." Raghuram Rajan's decision to step down without a second term as the RBI governor has led to markets and banks bracing themselves for any financial shock they may encounter.

The Securities and Exchange Board of India and stock exchanges would to play a critical role in maintaining a balance and secure the capital markets.

Monday's market trends would indicate the reaction to his departure. Taking a jibe at those writing his "obituaries", Raghuram Rajan- the Reserve Bank of India governor said that he will be around "a lot in India" even after leaves the Central bank.

He said he shouldn't be written off 'just yet'.

Notably, Jaitley too had snubbed Swamy and other politicians asking them to refrain from talking about economic officers who were working efficiently. He called such fondness of publicity "inappropriate", and said that anyone who thinks himself "bigger than the system is wrong".

He also praised Raghuram Rajan for the service he has rendered to the nation and said "wherever he will work, he will work for India and he is patriotic".