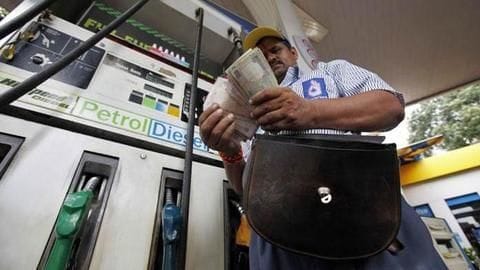 Petrol price was cut by 20 paise a liter and diesel by 18 paise on Sunday, the 29th straight daily reduction in fuel rates.

The price reduction has wiped away all of the massive price increase in petrol witnessed in two months since mid-August that had triggered a political uproar.

Fuel prices have been on the decline since October 18.

Petrol price in Delhi has been cut to Rs. 76.71/liter from Rs. 76.91 on Saturday, according to a price notification issued by state-owned fuel retailers.

With this, the reduction in rates in the last one month totals Rs. 7.29/liter for petrol and Rs. 3.89/liter for diesel.

Price hikes on petrol in two months wiped out

The latest price reduction has wiped out all of the price hikes on petrol in two months beginning August 16 and more than half on diesel. The reduction in diesel rates has been slower due to moderate fall in its benchmark international prices.

Prices had started to climb from August 16.

Prices hiked by over Rs. 6 between August 16-October 4

Government decided to cut excise-duty on fuel on October 4

On October 4, the government decided to cut excise duty on petrol and diesel by Rs. 1.50/liter and asked state-owned fuel retailers to subsidize prices by another Re. 1.

Many states matched that with a reduction in local sales tax or VAT.

On October 17, as international oil-prices continued to rise, petrol and diesel prices in Delhi increased to Rs. 82.83 and Rs. 75.69.

International oil prices have been declining since October 18

But since October 18, international oil prices have been falling, and the rupee has also appreciated, resulting in a decline in retail rates.

The retail selling price of petrol and diesel is dependent on the international prices of benchmark fuel and the rupee-US dollar exchange rate.

This is because a large proportion of the country's requirement is met through imports.