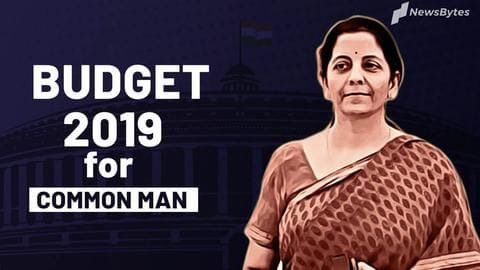 Riding on an epic mandate, the Centre, led by Prime Minister Narendra Modi, revealed its budget for 2019-20 on Friday. Union Finance Minister Nirmala Sitharaman presented the budget and her speech went on for more than two hours.

She said India will become a $3 trillion economy in 2019 itself.

If you are wondering how this budget will affect you, we have got you covered. Read on.

Don't have a PAN card? Still can file I-T returns The first major change Sitharaman announced was in I-T returns filing process, one which is sure to ease confusion.

If you don't have a PAN card, you can now file returns using Aadhaar.

Further, in a bid to boost cashless economy, she announced that a TDS of 2% will be levied on those withdrawing more than Rs. 1 crore from a bank account, annually.

No changes for middle-class, super rich to pay more tax

Sitharaman didn't make many changes in tax slabs. She said those earning upto Rs. 5 lakh annually won't have to pay taxes. To recall, this was what Union Minister Piyush Goyal announced when he presented the interim budget before country went into polls.

While she appreciated taxpayers for contributing towards nation development, she underscored those who earn more will have to pay more tax.

Surcharge levied on those earning more than Rs. 2 crore

Further, get ready to spend more on gold and petrol The Finance Minister increased customs duty on gold and other precious metals. The customs duty was increased from 10 to 12.5%, which means that buying ornaments is going to get expensive.

"I propose to increase special additional excise duty and road and infrastructure cess each one by Rs. 1 a litre on petrol and diesel," she said.

Separately, Sitharaman made it easier to purchase electric vehicles Small retail traders will get pension of Rs. 3,000/month

Under this scheme, which works on a 50:50 contribution basis, traders will receive a pension of Rs. 3,000/month after they turn 60.

This move is set to benefit nearly 3 crore retail traders.

A TV program to boost start-ups was also announced In an interesting (or bizarre) development, Sitharaman announced that a new TV program, meant only for start-ups, will be started soon.

The channel will be designed and executed by start-ups themselves, she quipped.

She also announced that an easily identifiable new series of coins of Rs. 1, Rs. 2, Rs. 5, Rs. 10 and Rs. 20 will soon be introduced for visually-impaired citizens.

Now, NRIs will get Aadhaar cards without waiting for 180-days

Sitharaman has some good news for NRIs as well, at least on the face of it.

She said NRIs, having Indian passports, won't have to wait for 180 days to get an Aadhaar card; they will get it on arrival itself.

Notably, soon after she finished her speech, PM Modi in his address to the nation said this budget would benefit everyone.

This budget is one of hope: PM Modi

PM Narendra Modi: The budget for a New India has a roadmap to transform the agriculture sector of the country, this budget is one of hope #Budget2019 pic.twitter.com/MeWoLXTC3g