Residents in Delhi have lodged several complaints regarding disturbance caused due to vibrations and noise from Metro train movements near their houses.

To deal with the problem, the Delhi Metro Rail Corporation (DMRC) is preparing guidelines to reduce noise levels at its elevated stations and is also testing a new technology to reduce vibrations at underground stations. The DMRC has sought help from the Central Road Research Institute (CSIR-CRRI) to prepare guidelines for measures to ensure that the noise levels along its elevated corridors are within the permissible levels.

These guidelines shall provide parameters for the installation of noise barriers, depending on factors such as noise level, location of the stations and distance of the buildings in the vicinity.

We are retrofitting the tracks to minimize noise/vibration levels: DMRC

"We had asked CRRI to prepare guidelines about three months ago, as there are no such guidelines available worldwide, specifically for Metro systems. Wherever there is a need, we are retrofitting the tracks to minimize noise and vibration levels," said DMRC's Anuj Dayal.

Currently, there are 181 elevated stations on the Delhi Metro Currently, there are 181 elevated stations on Delhi Metro route and trains travel through various residential areas of the city, including Karol Bagh, East of Kailash and Mayur Vihar.

According to Dr. Nasim Akhtar, Principal scientist at transportation planning and environment division, CSIR-CRRI, "We will recommend use of frequency-based noise barrier to be installed at elevated tracks so that there's no noise-related issue."

The guidelines will be submitted to DMRC by this month

"The noise level is close to 80 dB(A) on tracks. In the guidelines, we will recommend height and type of the noise barrier depending on distance of nearest buildings from the station or tracks, height of nearby structures and elevation of tracks, among other factors," Akhtar said.

He also said that the guidelines will be submitted to DMRC by the end of this month.

Residents of South, Central Delhi have complained of vibrations 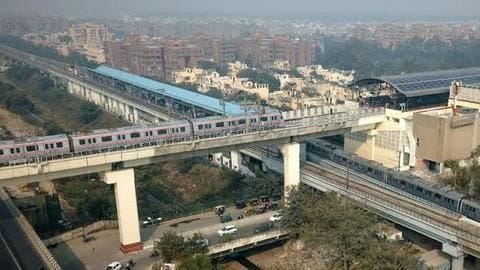 Apart from the noise, the other major issue facing the Delhi Metro is that of strong vibration disturbing residents, particularly in South and Central Delhi, since most of the underground stations are situated there.

Currently, there are 68 underground Metro stations in Delhi.

Residents of areas such as Saket, Hauz Khas, Begumpur, Shahbad Mohammadpur, and Sarvpriya Vihar have been worst affected from the vibrations.

"Thick pads or floating chambers can address problem of vibration"

These vibrations are caused due to interaction between the wheel and the rail track in underground stations.

According to DMRC, vibration on underground tracks is between 70-80 dB.

"Vibration is often experienced depending on factors such as type of underground surface etc. World over, thick pads are provided underneath the tracks or floating chambers are constructed to address the problem of vibration," Akhtar said.