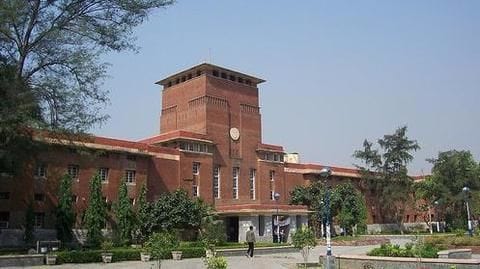 In another row of sexism controversy, DU's Commerce students are being taught to keep emails short like 'skirts' in a book called Basic Business Communication.

The author, Prof CB Gupta, as part of 'Email Etiquettes' recommended 'Email messages should be like skirts - short enough to be interesting and long enough to cover all the vital points'

Tap in for more news from Delhi.

Police stations in Lutyens' Delhi have no CCTV cameras An RTI blew the lid off the police stations in Lutyens zone of Delhi, revealing that there are no CCTV cameras installed in them.

The situation continues to remain so despite the fact that it is a sensitive-zone housing various government officials and protests often break there.

The RTI also unravelled the lack of medical facilities in the police stations highlighting their cavalier attitude. The management of Delhi Public School Ghaziabad, Palam Vihar was directed by the Fee and Fund Regulatory Committee (FFRC) to return hiked fees to parents.

This step comes after several protests by the parents. According to FFRC, 70% fee hike was illegal.

A school has to first apply for recognition from the government and fill Form 6 before taking any such kind of step. An Iranian student filed a complaint with the Delhi police, alleging that he was 'beaten up' by a group of students post India-Pakistan match on Sunday at Jawaharlal Nehru University.

He has made these allegations against ABVP student leader who has, however, denied attacking him.

JNUSU president said the incident did take place but the student is not interested in taking any legal actions. The victims of the Jewar gang-rape, robbery and murder case threatened to go on protest if the culprits are not arrested soon.

One of the victims who was allegedly raped tried to end her life by committing suicide on June 4.

The victims will protest against the police, who as per a medical report claimed, that they have not been raped. Doctors in Delhi will go on a strike on Wednesday to demand a central law curbing violence against them by the patients' kin. They will be joined by 10,000 doctors from across the country.

The out-patient departments in government and private hospitals in Delhi will be closed till 2 pm.

Hospitals outside Delhi will remain unaffected. However, emergency services will operate in all hospitals.

Rising cases of Malaria and dengue in Delhi Malaria, Dengue case count continue to rise in the national capital with 21 cases already been reported in the past week by the Municipal Corporation.

The total number of recorded dengue cases has reached 40. Malaria and chikungunya cases have gone up to 30 and 96 respectively.

According to experts, prevention of mosquito breeding is the only way to halt outbreaks.