Nora Fatehi on breakup with Angad: I don't regret it Angad Bedi is happily married to fellow actor Neha Dhupia and is a proud father of a baby girl.

And, now suddenly out of nowhere, Angad's ex-girlfriend Nora Fatehi opened up on their ugly breakup.

The former contestant of Jhalak Dikhhla Jaa said that she doesn't regret breaking up with Angad, but admitted that immediately after the split, she "lost my drive."

'When that breakup happened I got that fire again'

"I lost my drive for two months! However, I must say that experience transformed me. In between, I had lost hope for a bit in terms of perusing my career but when that breakup happened I got that fire again," Nora said. Apparently, the breakup helped Nora get back on track again.

Angad and Nora, lovers since long, were quite open about their relationship.

Don't know who Angad is, Nora had said earlier However, the two remained silent over their split.

When Angad discreetly married Dhupia last May, it surprised all, as none knew Angad and Nora had broken up.

Nora was also quizzed about the same, and she said, "I don't even know who Angad Bedi is. I never dated him, so I don't know what you're talking about. I've nothing to say about his wedding."

Nora will next be seen in Salman Khan's 'Bharat' 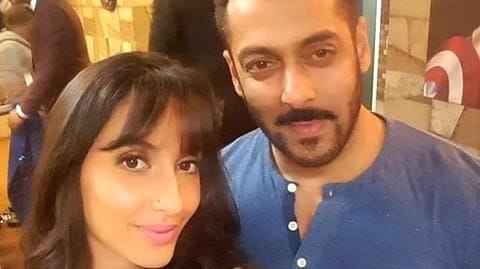 The 27-year-old is gearing for her first release of the year with Salman Khan's Bharat, releasing on Eid 2019.

She will also be seen in Remo D'Souza's Street Dancer, starring Varun Dhawan and Shraddha Kapoor in the lead.

This isn't all. The Canadian beauty will also be seen in Batla House opposite John Abraham.

Yes. Nora Fatehi was said to be dating Bollywood actor Angad Bedi for a while. However, the two called it quits abruptly last year.

Angad Bedi married Neha Dhupia in a hush-hush ceremony on May 10, 218.

What did Nora Fatehi say about breaking up with Angad Bedi?

Nora Fatehi stated that she doesn't regret breaking up with Angad Bedi. Although it was a difficult time for her, but it also helped her getting her fire back.

Which are Nora Fatehi's upcoming movies?

Nora Fatehi is currently gearing up for Salman Khan's Bharat and Varun Dhawan-starrer Street Dancer. Besides, she will also be seen in Batla House opposite John Abraham.

Can see a glimpse of Sridevi in Janhvi's eyes: Angad

Neha Kakkar on Himansh Kohli: He didn't deserve me