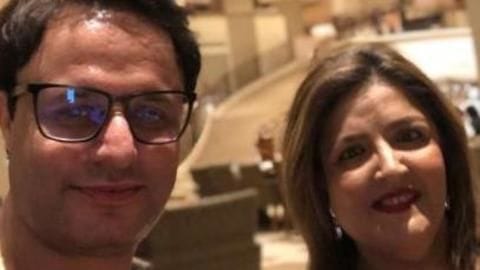 Just last week Kangana Ranaut's sister-cum-manager Rangoli Chandel, in a series of tweets, claimed that Hrithik Roshan and his family are harassing his sister Sunaina.

She claimed that Sunaina is being assaulted over her relationship with a Muslim man.

And now, that man, Ruhail Amin has spoken up, asking why the Roshans had no issue when Hrithik married Sussanne Khan, a Muslim.

Her parents put a security ring around her: Ruhail

Speaking on the issue, Ruhail said that Hrithik was once married to Sussanne, and that "everyone can see the irony here." "They didn't approve of our friendship. I also got to know that her parents put a security ring around her," he added.

Earlier, Sunaina had claimed that her brother Hrithik did not provide her any support or help when she was going through "hell."

Moreover, she claimed that her father Rakesh called Ruhail a "terrorist."

"I was in love with a Muslim guy, my father slapped me and told me that the guy I loved was a terrorist, which Ruhail isn't," she told Pinkvilla.

This is unfortunate, Ruhail reacts to Rakesh Roshan's "terrorist" comment

"If he was one, would he go scot-free and work in the media? Wouldn't he have been behind bars?" Sunaina asked.

Reacting to this, Ruhail said, "This is unfortunate. Labelling someone extremist just because he/she belongs to a certain religion is simply outrageous and needs to be condemned in strongest words."

Sunaina and Ruhail reportedly met each other last year through Facebook. Meanwhile, Rangoli revealed how Sunaina has been in touch with Kangana.

"Sunaina called Kangana every single day, she spoke to me and cried all the time, since she spoke to the media her phone is off, she told me her family doesn't only hit her but sadate her as well. Feeling helpless don't know what to do (sic)," Rangoli's latest tweet reads.

"Sunaina called Kangana every single day, cried all the time"

For past one month Sunaina called Kangana every single day, she spoke to me and cried all the time, since she spoke to the media her phone is off, she told me her family doesn’t only hit her but sadate her as well. Feeling helpless don’t know what to do. https://t.co/Tka0LPKpqI

We are all same: Hrithik pens emotional note on Instagram

What was Hrithik Roshan's sole condition to do 'War'?