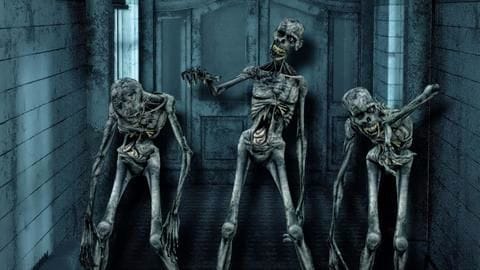 Bollywood never quite delved into the horror genre as the West did; it did have rip offs and inspired versions but getting a true blue horror movie that would induce chills is something that filmmakers here have not really tried, except, perhaps, the Ramsay brothers.

Here's to them and their art.

In some B-grade movie hall, a monster lurks Ramsay brothers are an acquired taste; their cinematic ventures, which now seem comical, were the stuff box-office hits were made of, in their days. If there was anything that they knew it was horror.

Movies like Purana Mandir, Veerana, Purani Haveli, Bandh Darwaza, and Dak Bangla were all made with extremely low budgets but with incredibly high aspirations and one garish villain. Nobody comes to the tinsel town with the dream of becoming a villain, it always has to be the hero. Then again, Anirudh Agarwal aka Ajay Agarwal (his screen name), although was bitten by acting bug, knew that he'll never become a hero.

Armed with a civil engineering degree and dreams he made a beeline to Ramsay studios, to be a villain. Boy! What a villain he made and a big credit goes to his stature and face. He was 6-feet 4-inches but camera trickery made him almost 7-8 feet tall and his face was the stuff of nightmares.

He later admitted that Ramsays never had to put makeup on his face; it was just villain ready all the time, 24*7 much to directors' delight.

So bad that it is really good He went on to act in several movies, which became cult classics later; not because they were good but because, like Ed Wood movies, they were that bad. They had sex, song-dance, heroics and him.

Agarwal was that one villain/monster, who could make anyone afraid anytime by just appearing on the silver screen. However, the novelty of it wore off after some years.

One more chapter to the story You don't get to see much of Anirudh Agarwal these days; his last outing was in 2010, after several years, reprising his role of Saamri, as his character was called in Purana Mandir. He is one of those forgotten chapters in Filmistaan.

Ramsay brothers have all passed away, except for Tulsi Ramsay, who wants to make movies but has few takers for his art.