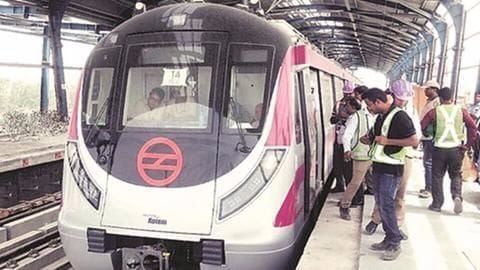 Come October and Delhiites would be traveling in 'driverless' magenta metros. The Magenta Line will see a commuter get one driverless metro every 100 seconds.

The Communication Based Train Control technology will be used at two Phase III corridors.

The new technology will see faster frequency of trains as it would reduce gap between the trains. From the looks of it, the new lines (both Pink and Magenta) seem to be equipped with advanced features that will ease passenger commutation.

With the promise of both speed and class, these new metro trains will see cutting short the distances across Delhi-NCR region to provide a hassle-free travelling experience.

What all these plush metro trains have to offer?

These new metro trains have a lot to offer. They are equipped with on-board CCTV cameras with a panoramic view along with dynamic route maps to let commuters know of their journey status. Working on the guidelines of 'Clean India', they are also energy efficient.

The rigorous quality check of these metros The trains which were ferried by sea at Gujarat's Mundra port had rigorous trial runs, with the interface being checked for physical infringement and structural issues.

Other checks which were made were on braking, overhead electrification and interconnection with operational centre.

Connecting all the lines together! Connecting all the dots would take some time and till then, the Hauz Khas metro station would serve as juncture to change between Samayapur Badli and HUDA City Centre and also between the Janakpuri West and Botanical Garden.

The other would be at Kalkaji which happens to be on the purple line.

Another interchangeable station would be Janakpuri West. 'Driverless' metros! Something fancy indeed which only time will tell if they are successful or not. As of now, it would be only interesting to know and wait for your first travel in these plush trains.

Initially, these trains will be driven by the drivers and later with time they will run on the Unattended Train Operation (UTO) mode.