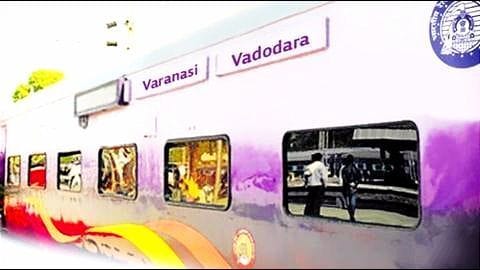 When the high-profile Varanasi-Vadodara Mahamana Express returned to Vadodara after its very first trip, railway officials were shocked to find some passenger amenities on the train were missing!

Toilets were damaged while many seats had scratches on them; also, mirrors were nearly broken.

PM Narendra Modi flagged off the train on 22 September.

Ravinder Bhakar stated: "We are trying our best to provide modern facilities to every passenger. It is very disappointing if some miscreants steal taps and showers from the lavatory. They didn't even spare the carpets. The coaches were defaced too." The deluxe train comes with plush interiors: ergonomically-designed ladders for upper berths, windows with roller blinds, and LED reading lights, among others.

Out of 18 coaches, one is First AC, two Second AC, eight sleeper and four general. There are no AC-3 tier.

The washrooms have big mirrors, an odor control system and exhaust fans.

It will be a weekly service traversing four states

The new service will be weekly: from Varanasi every Friday and from Vadodara every Wednesday. The 1,531-km journey will take 27 hours and 30 minutes.

It will journey through four states and stop at Bharuch and Surat (Gujarat); Amalner and Bhusawal (Maharashtra); Itarsi, Jabalpur, Katni and Satna (Madhya Pradesh); and Chheoki (Uttar Pradesh).

It has been named after a former Hindu Mahasabha president

The deluxe Mahamana Express, a product of the Make in India initiative, has been named after Madan Mohan Malviya, former president of the Hindu Mahasabha. Malviya was popularly known as 'Mahamana'.