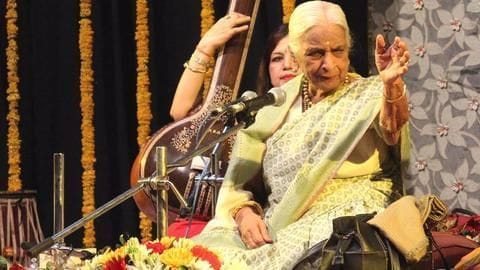 Eminent classical singer Girija Devi, the 'Queen of Thumri', passed away in Kolkata yesterday after a cardiac arrest. She was 88.

When brought in, she was "quite critical" and was put on life support, but passed away around 8:45 pm.

Her demise is an irreparable loss to Banaras Gharana, admirers mourned.

Girija Devi is survived by her daughter. Girija Devi (Appa Ji) was born in Varanasi in 1929. She was taught by vocalist Sarju Prasad Misra early on.

She worked as faculty at the ITC Sangeet Research Academy, Kolkata, and at the Banaras Hindu University later.

Saddened by demise of Girija Devi ji. Indian classical music has lost one of its most melodious voices. My thoughts are with her admirers. Eminent personalities including the PM and president mourned her loss. Singer Shubha Mudgal called it an "irreparable loss".

Lyricist Javed Akhtar said, "We are poorer without her."

"Thumri lovers like me shall mourn her forever," actor Prosenjit Chatterjee tweeted.