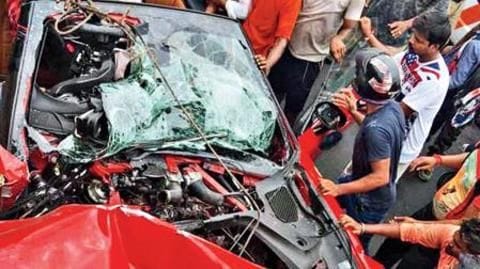 A businessman was killed and a teenager critically injured in Howrah (West Bengal) when their speeding Ferrari rammed the divider of a flyover and crashed yesterday.

The other was immediately rushed to hospital, but Shibaji Roy, director with ML Roy & Co, was stuck in the mangled car for 40 minutes as no gas-cutter was available.

He died on the way to hospital.

The family had taken out their cars for a spin Friends of 42-year-old Roy said the family often went out on drives in their high-end cars.

Yesterday's seven-car convoy included the Ferrari California T, a Lamborghini, two Porsches, two BMWs and another Ferrari. They were on their way back from a CCD outlet at Govindpur.

Accompanying Roy in his car was 17-year-old Aashna Surana, daughter of his friend Adarsh.

The car swerved to avoid hitting a truck Around 9:40am, the group reached the Pakuria flyover near Salap on NH-6. At its mouth, the carriageway narrows.

Another driver in the convoy described later how a truck suddenly changed lanes and moved to the right without any signal.

Roy was forced to swerve further right to avoid hitting the truck, and in the movement, rammed into the divider.

Aashna suffered multiple injuries and is currently on ventilation at CMRI Hospital. It is still not known why the car's anti-locking system didn't activate. The sanitation company Roy worked at is one of the city's most prominent businesses.