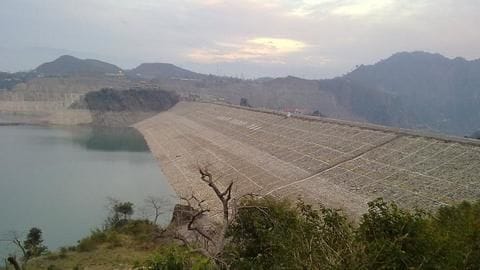 Punjab and J&K have resumed work on the Shahpur Kandi Dam project. The Indus River in South Asia crosses over Tibet, India, Pakistan and Afghanistan before it empties into the Arabian Sea near Sindh, Pakistan.

After the partition in 1947, Indus Waters were a major cause of friction between the two countries.

The need for a permanent solution was felt when tensions escalated in 1951.

Negotiations continued for 9 years before The Treaty was signed. The Treaty is a water distribution arrangement. Its a trilateral agreement entered into between India, Pakistan and the World Bank.

It was signed in Karachi on September 19, 1960 by Jawaharlal Nehru and President of Pakistan, Ayub Khan.

The Treaty lays down precise directions with respect to distribution of water from six rivers that flow from Tibet through India to the shared Indus Basin.

The Treaty: An exemplary success

Since The Treaty was ratified, Pakistan and India haven't engaged in 'water wars'. The Treaty is considered to be an exceptionally successful water-sharing agreement. UN Deputy Secretary-General Jan Eliasson's said, "The Treaty between India and Pakistan has survived two wars, and remains in force today." Swarup revealed there currently were differences between India and Pakistan on the implementation of The Treaty.

He added that for any such treaty to work, "mutual trust and cooperation" were essential requirements. Key decisions taken include expediting construction of dams on Chenab river, India to use potential of 18,000 megawatt of power from the western-rivers and restarting construction on Tulbul navigation project.

Revocation of Indus Water Treaty an "act of war": Aziz He stated that India could not unilaterally revoke the treaty as it was an international agreement with the World Bank as its guarantor.

He added that consequently, Pakistan could approach the International Court of Justice.

Will not accept any modifications in Indus Waters: Pakistan Vikas Swarup said that the technical design parameters concerning Pakistan would be resolved once consultations were given adequate time.

However, Pakistan said this was India's old strategy: where projects were completed during disputes and then completion was used as an excuse. Solomon will meet Indian officials to seek details about the Kishanganga and Ratle hydro-power projects, which Pakistan says violates the Indus Waters Treaty.

He will then travel to Pakistan to seek their side of the argument. The foreign affairs and water and power committees of Pakistan's parliament asked the World Bank to set up a court of arbitration to settle the disputes.

It asked the World Bank to play its role without further delay. The report said Pakistan's "negligence in conducting a sound analysis of trans-boundary water issues...caused the issues to linger on and remain unaddressed."

The report said though the IWT was highly successful, water-scarcity has created conflict. Punjab and J&K have resumed work on the Shahpur Kandi Dam project.

What is Indus Waters Treaty? Here's everything you should know