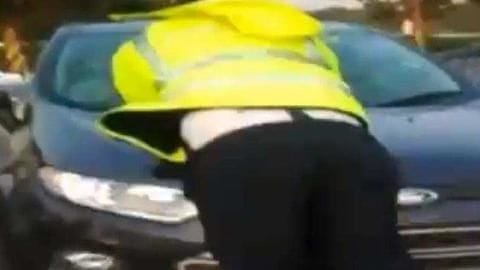 In yet another incident which highlights road rage in Delhi/NCR, a driver dragged a traffic cop on his car's bonnet for 100 meters after he was pulled up for breaking the rule.

The arrogance of the driver was caught on camera and the video has gone viral.

The incident took place in Gurugram on Wednesday, reports claimed, after he drove on the wrong side.

Man was driving on wrong side, was pulled up Near the Signature Tower Chowk of the city, the man was stopped by traffic cops for violating traffic rules.

One officer asked him to produce documents but the driver showed reluctance. He was asked to step out of the car and he then dialed someone from his phone.

He asked the cops to talk to someone but they refused and continued with their job.

Man tries to run away, cop fails to stop him The cop tells the man they weren't his enemies and were standing there for the safety of citizens.

When the man persists and asks them to speak to their 'senior' the cops tell him they belong to a different department.

Soon the man gets into the car, and one cop realizes he is fleeing. He attempted to stop him and the man dragged the officer on his car's bonnet.

#WATCH: Man stopped by traffic police for driving on the wrong side near Signature Tower Chowk in Gurugram, dragged traffic personnel on the bonnet of his car when the personnel tried to stop him. He was later arrested the car was also seized. #Haryana (19.12.18) pic.twitter.com/BbyN79ysIW

Being a traffic cop is not easy Notably, this is not the first incident when traffic cops faced danger. In November, a truck driver hit and dragged a policeman for some distance at Rao Tula Ram Marg in southwest Delhi, after refusing to slow down. The cop lost his life.

In April, a cop jumped on a car's bonnet to stop the speeding driver and hurt his hand in Delhi.

On related note, sense of entitlement runs high in Gurugram On Wednesday, just outside NewsBytes office in Sushant Lok Phase 1, a Minocha family first punctured two tires of a car which was parked 20 meters away from their house, then the matriarch of the family got into a verbal spat with the car-owner.

Meanwhile, her son threatened the owner with his 'contacts'. The son is reportedly a member of the welfare society.

Where does this sense of entitlement stem from?

Where was traffic cop dragged on car's bonnet?

A driver in Gurugram dragged a cop on the bonnet of his car for some distance.

Why was the driver pulled up?

The man was driving on the wrong side.

What is the punishment for driving on wrong side?

Driving on the wrong side of road invites a fine or a court challan.

What action did traffic police take?

The police seized the man's car and arrested him too.

In Delhi, cops to pay double-penalty for violating traffic laws