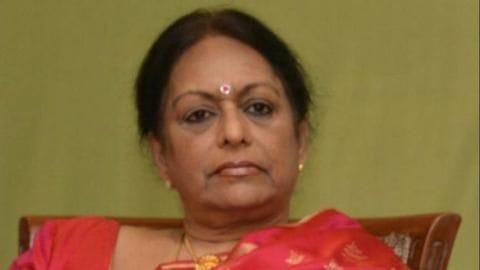 The CBI has filed a charge sheet against Nalini Chidambaram, the wife of former Union finance minister P Chidambaram, alleging she had received Rs. 1.4 crore from Saradha group of companies, embroiled in a chit fund scam, officials said today.

It is alleged Nalini entered into a criminal conspiracy with Sudipta Sen, the proprietor of Saradha group with an intention of cheating.

Charge sheet filed in a special court in Kolkata

Nalini along with Sen and other accused persons entered into a criminal conspiracy with an intention of cheating and misappropriation of funds of Saradha group of companies, CBI spokesperson Abhishek Dayal said. The charge sheet was filed in a special court in Kolkata, he said.

The CBI alleged that Manoranjana Sinh, the estranged wife of former Union minister Matang Sinh, introduced Sen to Nalini to manage probes by various agencies like SEBI, ROC against him for which she allegedly received Rs. 1.4 crore during 2010-12 through his companies.

The Saradha group had raised Rs. 2,500 crore from people luring with attracting interest rates, which were not repaid.

This is the sixth charge sheet in the Saradha scam

Sen had closed operations of the company in 2013 after failing to pay the returns. This is the sixth charge sheet in the Saradha scam, which was handed over to the Central Bureau of Investigation by the Supreme Court in 2014.