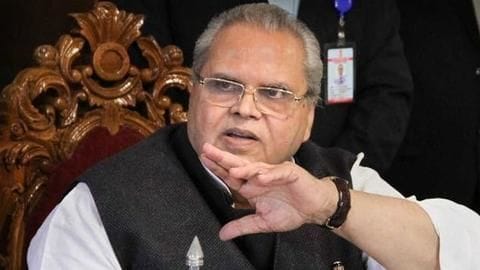 Jammu and Kashmir Governor Satya Pal Malik today advised terrorists to shun the path of violence, assuring that his administration is ready to do whatever it can for their rehabilitation.

"There's nothing like 'operation all out' and some are using this wrong term. We want these children (terrorists) to come back and we're ready to do what we can do for them," Malik said.

'On our side, we don't have any 'operation all out''

Malik was replying to a question on the call by some politicians to stop 'operation all out' and an inquiry into the killings in the Kashmir Valley.

"When a terrorist somewhere opens fire or hurls an explosive, it cannot be like this you will fire and we'll give you flowers and bouquets. On our side, we don't have any 'operation all out'," he said.

Terrorists will achieve nothing from violence, feels J&K governor

"They (terrorists ) should leave this path as they will achieve nothing from this. There is nothing like 'operation all out'," Malik said while speaking on the sidelines of a function in Jammu.

NC chief Farooq Abdullah recently said that if his party is elected to power in the 2019 polls, it'd establish a truth and reconciliation commission to probe killings in the state.

'One can go to any extent for a vote'

On Abdullah's claim, Malik said he (Abdullah) is stating something new daily. "He's a senior politician so commenting on him isn't good," the governor added. Malik said mainstream politicians have political compulsions and "in our country one can go to any extent for a vote".

2019 polls: J&K administration is ready for the democratic exercise

"They are all political people and have political compulsions. For a vote, the people go too far in this country. I understand the compulsions of everybody and honour them," he said when asked about statements made by some politicians recently.

On the assembly polls in the state, the governor said his administration is ready for the democratic exercise.

'I can say with authority that J&K is far ahead'

"We're ready for polls. When the Election Commission will decide, we will hold the elections," the governor said.

Meanwhile, Malik inaugurated a musical fountain and an open-air gymnasium constructed by the Jammu and Kashmir Bank at Rajinder Singh Park.

"We're being demonized across the country that everything here is wrong. But I can say with authority that J&K is far ahead," he pointed out.

Malik further said J&K is much ahead than many states and "the J&K Bank is one such institution which is doing good." He suggested the bank to concentrate on providing loans to artisans and workers and said it's the ability to uplift society's weaker sections.