Pooja Shakun Pandey, the Hindu Mahasabha leader, who recreated Mahatma Gandhi's assassination on January 30 by shooting at his effigy, was arrested early on Wednesday, a TOI report claimed.

She was arrested from Tappal area, Aligarh SSP Aakash Kulhari confirmed to the daily. Pooja's husband Ashok was also taken into custody.

Speaking to reporters after her arrest, Pooja said she didn't regret her actions.

Aligarh: Hindu Mahasabha’s Pooja Pandeyher husband Ashok Pandey produced before local court. They were arrested from Tappal for recreating Mahatma Gandhi’s assassination. Pooja Pandey says, "No regrets. We have not committed any crime. We have used our Constitutional right." pic.twitter.com/y02DmO3iNh 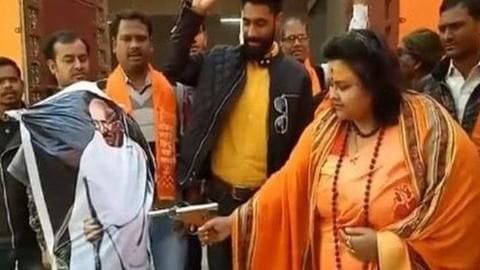 Pooja and her group members recreated his assassination and raised slogans praising Nathuram Godse, his assassin. She also paid obeisance to Godse and distributed sweets.

Notably, Hindu Mahasabha holds Gandhi 'responsible' for the partition of 1947 which led to 'deaths of millions of Hindus'. The video, which showed an unapologetic Pooja pulling the trigger, was widely condemned.

Soon police acted and a case was registered against several people, including Pooja.

The FIR was registered under IPC Sections 147 (rioting), 148 (rioting, armed with deadly weapon), 149 (unlawful assembly), 295 A (Deliberate act intended to outrage feelings) and 153A (promoting enmity).

Earlier, seven activists were arrested in the case. 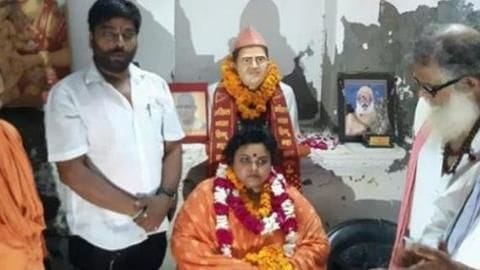 Notably, this isn't the first time Pooja made it to headlines due to her atrocious behavior. In August 2018, she allegedly threatened to shoot all Gandhi's followers if they embarked on his path.

She even said she would have shot Gandhi had she been born before Godse.

This time around Pooja felt proud she started a 'tradition' akin to Ravana Dahan in Dusshera.

Out of the seven activists who were arrested, three were granted bail by a local court. Two members, who were booked, are still absconding.

What did Hindu Mahasabha do?

Hindu Mahasabha recreated the assassination of Mahatma Gandhi on January 30.

Who is Pooja Shakun Pandey?

What did Pooja Shakun Pandey say after arrest?

Pooja Shakun Pandey said she didn't regret her actions and was exercising her constitutional rights.

Hindu Mahasabha holds Mahatma Gandhi responsible for 1947 partition which led to deaths of 'millions of Hindus'.

Pooja Gandhi accused of non-payment of bills, she denies allegations