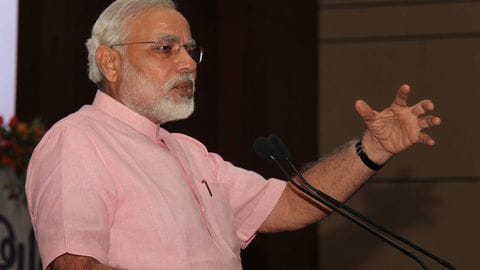 Sources said that over 90% of the demonetized notes have been returned to banks; PM Modi defended the demonetization scheme, saying the move destroyed "terrorism, drug mafia, human trafficking and underworld."

He added that few sections were unhappy with the move as it affected their illicit income.

He also said the common man was alright with bearing slight hardships for the greater good.

Out with the old, in with the new: Currency Prime Minister Narendra Modi in a strong move against black money, announced that old Rs.500 and Rs.1000 denomination notes will be rendered invalid from 12:00 am, 9 Nov.

People were given 50 days from 10 Nov to 30 Dec, to deposit their old notes in banks.

Over the counter exchange of the old notes has been stopped from 25 November, 2016. They can still be exchanged at the RBI. However bank deposits for the same will continue until 30 December, 2016.

Can old notes still be used? Old notes can still be used at several places.

In addition all government-hospitals are accepting old notes, and so are all pharmacies as long as you have a prescription.

The old currency can be used to pay school-fees in government schools, mobile top-up, electricity bills and at railway & airline counters. Modi government has come out with a two-pronged strategy where those who voluntarily come and disclose their black money will pay a penalty of 60% of the amount.

This penalty is higher "than the 33.9% tax levied on current (high) income."

Those trying to hide their money will be heavily penalized. Sources said the government may be in the process of amending the IT Act to be able to penalize individuals depositing unaccounted money in their accounts.

The government said if you declare the deposit unaccounted, 50% tax will be applicable; else the government will impose 60-90% tax along with penalties.

The government may introduce a money bill in the Lok Sabha. The RBI also said that printing of Rs.500 notes has been doubled in an effort to calm the cash-crunch. The RBI in a sudden move has reduced the validity of old Rs.500 notes to be used in petrol pumps and to buy airline tickets.

RBI had earlier stipulated that old Rs.500 notes could be used at petrol stations and airports until 15 December, but has reduced it till 2 December now.

The move was made as over 50% of demonetized notes were returned. Rajnath Singh slammed the RBI for freezing 52,000 accounts in the State Bank of Sikkim calling it a roadblock to the implementation of demonetization; RBI contends that SBS is not covered under the Banking Regulation Act.

A former CRPF soldier committed suicide allegedly due to inconveniences after the demonetization scheme. According to Finance Minister Arun Jaitley, the Reserve Bank of India was fully prepared to face currency shortages post demonetization; it has enough currency to last "far beyond 30th December."

He said that RBI maintained its currency stock through both advanced and current printing level.

About currency presently in circulation, Jaitley said figures will be made public after accurate calculation post 30th December. 500-rupee notes printed daily at the Currency Note Press (CNP) in Nashik saw a threefold increase as steps are being taken to meet shortage of newly introduced currency.

CNP sent its biggest consignment of currency notes after the demonetization announcement. Sources said that over 90% of the demonetized notes have been returned to banks; PM Modi defended the demonetization scheme, saying the move destroyed "terrorism, drug mafia, human trafficking and underworld."

He added that few sections were unhappy with the move as it affected their illicit income.

He also said the common man was alright with bearing slight hardships for the greater good.