In a remarkable innovation, a 17-year-old boy from Odisha has developed a mobile flip cover, using biodegradable products like cow dung and bael leaf. It is cheap and also protects users from harmful radiation.

Bhubaneswar-based Ayush Acharya is the new prodigy in town whose innovation is not just eco-friendly and easy on the pocket, but also will protect users from cancer-causing harmful radiations.

Ayush's guide teacher encouraged him to contribute to the society Ayush told Odisha TV that he was motivated by his guide teacher for the project.

"I want to thank my guide teacher Rajashree Ma'am. She inspired me a lot to work for the society and motivated me to prepare a product which everyone can afford," he said.

That's how "the idea of a mobile back cover, which can absorb radiation" came to his mind. While working on the project, Ayush, through a microscope, observed that the particles found on the bael leaf have a systematic arrangement that releases positive energy.

Thereafter, he experimented with different layers of bael leaf in hot lamination and cold lamination and added some amounts of cow dung in both mixtures separately.

He then combined both the mix and dried them for one week. 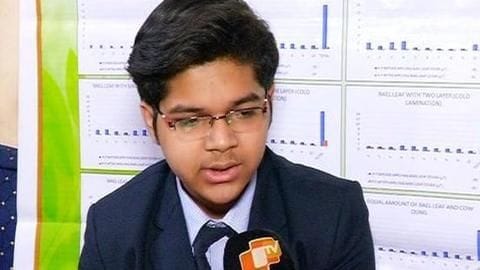 After the mixture became dry, Ayush used it as a back flip cover and it was tested with EMF detector.

Less radiation was absorbed by the product.

"After as many as 170 observations and 250 surveys, I reached a conclusion that my Experiment-13, the solution of which was successful, can absorb all types of radiation without affecting the clarity of the cover," he said.

Radiation level in general cellphones is high, can cause cancer "Generally, radiation should be below 0.5 Tesla but the radiation level in a few mobile phones ranges from 1.35-10.6 Tesla, which is extremely harmful for the human brain and can even cause cancer," Ayush explained.

His product is of "almost zero cost", eco-friendly and easily decomposable.

"If we compare it with the products in the market, this will certainly prove much better," he said.