Air Vice Marshal RGK Kapoor held a press briefing on Monday in which he confirmed that Wing Commander Abhinandan Varthaman shot down an F-16 jet of PAF on February 27.

IAF held a press meet after Pakistan claimed F-16s weren't used for the combat, which took place a day after Balakot camp was attacked.

From Pulwama attack to Abhinandan's return: Understanding what happened On February 14, a CRPF convoy was attacked by Jaish-e-Mohammed on Jammu-Srinagar highway and 40 soldiers were martyred.

12 IAF jets breached Pakistani airspace on the intervening night of February 25 and 26 to demolish JeM's camp in Balakot.

A day later, Pakistan attacked India's military establishments. IAF jets thwarted their attempt and Abhinandan was captured after he shot down an F-16. He returned on March 1.

As per defense agreement, Pakistan can't use F-16s without permission Abhinandan was piloting his vintage MiG-21 Bison when he went for F-16 kill. The advanced jet is made by the US. Pakistan can't use it for its wars.

This is the reason why the neighboring country kept saying F-16s weren't scrambled.

Last week, a US publication also claimed officials "counted" F-16s in Pakistan, and none were missing. However, the Pentagon rubbished the report. He drew attention to the fact that PAF's spokesperson Asif Ghafoor said his country had taken three pilots into custody. Soon, he said two pilots were imprisoned and out of them one was undergoing treatment.

Kapoor said one pilot was Abhinandan but no one knows about the second pilot. 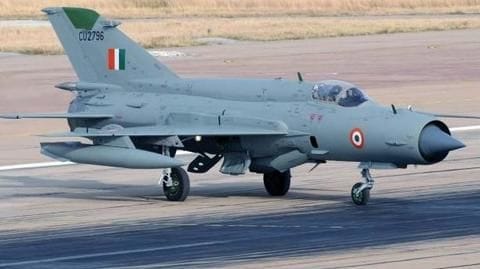 "The first sighting was due West, in general area Sabzkot and the second, was after a few minutes, Southwest, general area Tandar. The two areas are approximately 8-10 km apart," he added.

"Analysis of electronic emissions have shown that the aircraft picked up by ELINT intercepts from AWACS and radio transcripts indicated F-16s in the area directly in front of Wing Commander Abhinandan," said IAF.

Here are the images which confirm presence of F-16

Earlier, India had shown debris of AMRAAM missile too It should be recalled that when Abhinandan was in custody, IAF had displayed debris of AMRAAM missile, which can only be fired through F-16, to support its claim.

New Delhi is also learned to have told Washington about the use of F-16 by Pakistan prompting latter to seek more information.

Earlier, the Pentagon also underlined that the US has stopped giving military aid to Pakistan.