UP shocker: Railway cops beat journalist, urinate in his mouth 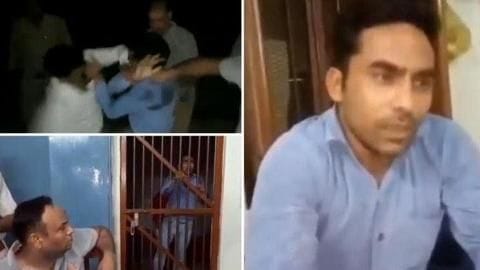 A distressing video has emerged from Uttar Pradesh wherein a journalist was slapped, punched, and abused by a group of policemen who paid no attention to his pleas.

The journalist, identified as Amit Sharma, was covering a train derailment story when railway cops showed their inhumane side.

Sharma was stripped and cops urinated in his mouth.

Are you paying attention, Yogi Adityanath?

Sharma was covering a story on train derailment Sharma, who works as a stringer for TV channel News24, was in Shamli to cover a story. Two wagons of a goods train had derailed near Dhimanpura on Tuesday night.

A team of railway police personnel headed by SHO Rakesh Kumar reached the spot and Sharma was also present there.

Reportedly, an argument broke out after which the cops started thrashing him.

Cops locked Sharma, stripped him, urinated in his mouth

The unruly officers were dressed in plain clothes, revealed Sharma.

The video which went viral on social media were shot by other local journalists. They claimed he was dragged to GRP station.

"One hit my camera and it fell down. When I picked it up, they hit and abused me. I was locked up, stripped and they urinated in my mouth," Sharma added.

Shame: Journalist gets beaten up for doing his job

#WATCH Shamli: GRP personnel thrash a journalist who was covering the goods train derailment near Dhimanpura tonight. He says, "They were in plain clothes. One hit my camerait fell down. When I picked it up they hitabused me. I was locked up, strippedthey urinated in my mouth" pic.twitter.com/nS4hiyFF1G Sharma was released on Wednesday morning after other scribes protested at the station.

As the video went viral, UP Police, which oversees Government Railway Police, stepped in. Subsequently, SHO Kumar and constable Sanjay Pawar were suspended.

"Strict punishment shall be accorded to policemen misbehaving with citizens," tweeted UP Police.

Watch: Victim narrated the abuse he went through

The News 24 journalist, locked up in the GRP station, can be heard narrating the ordeal. He dubbed the attack as a retaliation for a negative story. Accused inspector/SHO Rakesh Kumar sat on chair and kept confronting other journalists protesting against the incident. pic.twitter.com/dVSPrGKog7

Last week, UP Police arrested a journalist for 'defaming' Adityanath This incident comes at a time when the UP government is already facing ire for ill treatment meted towards journalists.

Apart from Kanojia, four others were arrested for similar 'offenses'.

Adityanath clearly needs to give some answers.

Who is the journalist beaten by railway cops in UP?

The journalist was identified as Amit Sharma. He works as a stringer for TV channel News24.

Why did cops beat Amit Sharma?

Sharma was in Shamli to cover a train derailment story when cops started beating him.

What did Amit Sharma say about the abuse?

Amit Sharma said he was kicked, punched, and cops urinated in his mouth. He was also locked up and stripped.

Has Amit Sharma been released?

Yes. He was released after local journalists protested at the station.