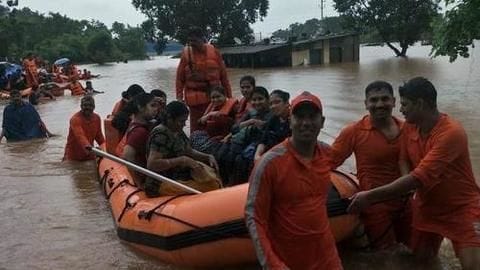 The incessant rains in Mumbai and other parts of Maharashtra not just threw normal life out of gear, but also spelled insurmountable troubles for the 700 passengers who were aboard the Mumbai-Kolhapur Mahalaxmi Express.

Due to downpour, the train had been held up between Vangani and Badlapur since 3 AM.

Now, all the passengers have been rescued successfully.

After being stranded for hours, passengers got some respite

The site where the train was held up is nearly 100 kilometer away from Mumbai.

Initially, it was reported that 2,000 passengers were stuck on the train, but Chief Public Relations Officer of Central Railways Sunil Udasi later said the number was 700.

He also said that Railway Protection Force (RPF) and City police had reached the spot to distribute biscuits and water.

Earlier, passengers were requested to not leave the train

"We request passengers of Mahalaxmi Express not to get down from the train. A train is a safe place. Staff, RPF & City Police are in train to look after you. Please wait for advice from NDRF & other disaster management authorities, (sic)" Udasi added.

God! This is how badly the Mahalaxmi Express train is stranded with about 2000 passengers inside between Badlapur and Vangni near Mumbai. NDRF and CR teams to the rescue @mid_day @RailMinIndia pic.twitter.com/Gjyu0D1dmf

Teams of Navy and IAF were sent for rescue operations 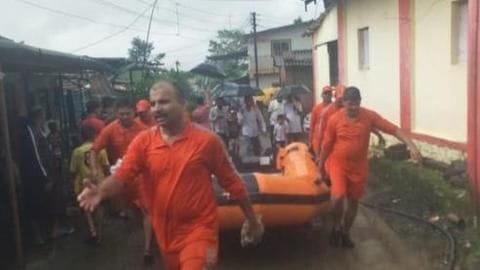 As soon as authorities learned of the incident, they deployed relief teams.

Earlier in the day, the office of Chief Minister Devendra Fadnavis said, "Seven Navy teams, two helicopters of Indian Air Force, two military columns were deployed along with the local administration. Two more military columns are on the way."

However, the helicopters were forced to return due to poor weather conditions.

Three diving teams were also sent to the spot

Meanwhile, the Western Naval Command revealed that eight flood rescue teams, including three diving teams, have been tasked with rescue operations. They are armed with rescue material, inflatable boats, and life jackets.

Meanwhile, Mumbai won't get any relief from rains soon 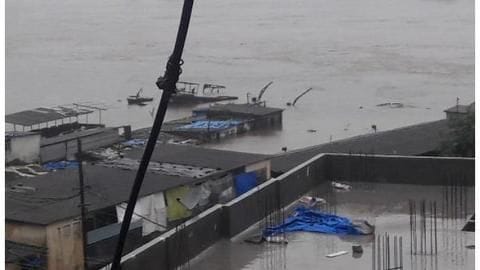 On a related note, the Indian Meteorological Department has predicted that Mumbai will receive heavy to very heavy rainfall in the next 24 hours.

Naturally, the incessant rainfall affected flight services. A spokesperson of Mumbai International Airport said seven flights were canceled while nine have been diverted.

Where is the Mumbai-Kolhapur Mahalaxmi Express held up?

The Mumbai-Kolhapur Mahalaxmi Express is stranded between Vangani and Badlapur.

How many people are stranded on Mumbai-Kolhapur Mahalaxmi Express?

700 people are stranded on Mumbai-Kolhapur Mahalaxmi Express. Initially, it was reported the number is 2000.

What did IMD predict about Mumbai rains?

IMD predicted Mumbai will receive heavy to very heavy rainfall in the next 24 hours.

How many people have been rescued from Mumbai-Kolhapur Mahalaxmi Express?

Till now, seven people have been rescued.