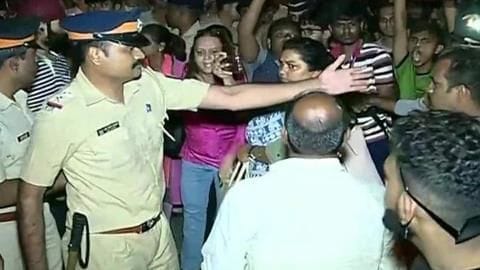 Merely hours after the Bombay High Court on Friday dismissed all four petitions challenging the felling of trees in the Aarey Colony in Goregaon East, Mumbai, authorities started cutting trees at the site.

High drama ensued past midnight as several activists who camped at the site to hold protests were reportedly detained.

Meanwhile, bulldozers were brought in to raze the trees. On Friday, the HC dismissed four petitions, filed by activists, against allowing the Mumbai Metro Rail Corporation Ltd (MMRCL) to cut 2,646 trees in Aarey, which the court said was "not a forest."

However, activists alleged that in the cover of darkness, authorities went ahead with the felling of trees, despite a 15-day waiting period after the court order was uploaded on its website. 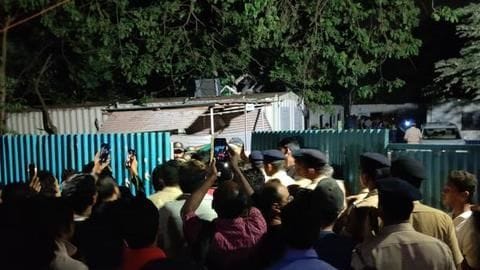 The felling of trees mere hours after the court's ruling sparked overnight protests at the site. A video highlighting that the cutting of trees had already commenced surfaced online late Friday night.

The felling of trees is in violation of rules of the Municipal Corporation of Greater Mumbai (MCGM), NDTV reported.

Meanwhile, The Quint reported over 30 activists have been detained since Friday night.

According to ANI, Section 144 of the CrPC was imposed near the site early Saturday morning, prohibiting assembly of over four persons. Reportedly, 25 people were booked under IPC Section 353 (assault or criminal force to deter public servant from discharge of his duty).

'Courts shut. Forest will be gone by reopening'

Notably, the activists said in a statement, "The permission for the tree cutting of Aarey metro 3 Car shed depot was uploaded on the MCGM website on 4th October 2019 evening and tree cutting began the same night."

They added, "The courts are shut for the weekend and then for Dussehra... By the time courts reopen, the forest will be gone."

You can watch the aforementioned video here

There is supposed to be a 15 day waiting period after permission is granted and notice has been uploaded on official website. But there is no waiting here. Our trees are being cut as citizens desperately plead to STOP this! @moefcc @PrakashJavdekar #Aarey https://t.co/nmVP7WllI7

Another activist, Amrita, said, "We're unable to reach the site where the trees have been cut exactly. But we estimate 300-400 trees to have been cut."

After the first video surfaced, several other visuals from the scene were also posted online, including those from protests against the felling of trees. Several others tweeted criticizing the Devendra Fadnavis government in Maharashtra and the Brihanmumbai Municipal Corporation (BMC).

The @ShivSena ‘s @sheetalmhatre1 ji Shubha Raul ji at Aarey. Even @prabhu_suneel ji has been standing up for it with the citizens. Wonder why @MumbaiMetro3 is treating Mumbaikars like criminals and not listening to sensible demand of sustainable development. https://t.co/ZdjF8ttKTk

Lathi Charge done for the first time at the peaceful protests for Aarey. People have been detained inside, gates have been closed and the authorities are abusing the protestors. Women have been pushed and detained by the police at this hour, which is lawfully wrong. #SaveAarey

The urgency shown by the authorities to cut the trees at #Aarey is in clear violation of citizens' rights and demands.@Dev_Fadnavis govt. can't take refuge of the night's dark hours to hide its Anti-Mumbai actions.#SaveAarey https://t.co/tcmbGTLr3V

Activists have been trying to Save Aarey for 2 years For the past two years, activists have protested the decision of MCGM's Tree Authority to allow the construction of a Mumbai Metro car shed at Aarey Colony, which along with the Sanjay Gandhi National Park, is considered the "lungs" of Mumbai.

Aarey has over five lakh trees.

However, MMRCL and BMC have argued that the metro car depot is in the public's greater interest.

Aarey: No more cutting of trees till October-21, says SC