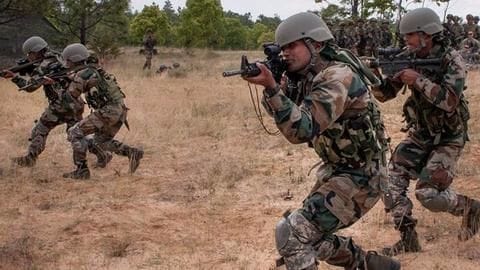 In the first ceasefire violation by Pakistan this month, an Indian BSF jawan and an Army soldier were martyred in Poonch district in Jammu and Kashmir.

Pakistan reportedly fired upon 2 border posts, and simultaneously launched an attack on an Indian troop patrol operating between these posts. After the partition of British India in 1947 and creation of India and Pakistan, both the nations have been involved in four wars.

The separation, as expected by leading politicians, should have created peaceful relations.

However, issues like sharing waters of the Indus river system and who gets administrative control over Kashmir remained.

3 out of the 4 wars have been over Kashmir.

Pakistan has scant regard for International Borders In 2015, there were 152 ceasefire violations along the LoC and 253 along the International border.

Figures reveal that since India conducted surgical strikes in PoK, Pakistan has carried out over 75 ceasefire violation on the borders. In the first ceasefire violation by Pakistan this month, an Indian BSF jawan and an Army soldier were martyred in Poonch district in Jammu and Kashmir.

Pakistan reportedly fired upon 2 border posts, and simultaneously launched an attack on an Indian troop patrol operating between these posts.

Reports indicated that the bodies of the two jawans were mutilated. The Indian Army's Northern Command called it "an unsoldierly act by the Pak army" which "will be appropriately responded." In a telephonic conversation on Tuesday, the director general of military operations (DGMO) of India condemned the mutilation of the 2 Indian soldiers, calling it "dastardly and inhuman."

However, Pakistan denied the involvement of its troops on Monday in an attack on an Indian patrol in Jammu and Kashmir.

Condemning the mutilation of Indian soldiers by Pakistan, former defence minister A.K. Antony said "During our time, only one such incident happened...But here it has happened thrice. It has affected the morale of the Indian Army. It puts a question on the security structure."

India: Blood trail is evidence of Pak role in beheadings Foreign secretary S Jaishankar told Pakistan high commissioner Abdul Basit that there was a blood trail that proved that the perpetrators of the beheadings of Indian soldiers along the LoC were from Pakistan.

He said the blood-trail "clearly shows that the killers returned across the line of control."

However, Pakistan continues to deny involvement, asking India for "actionable evidence" on the claims.

Evidence of "active participation" by Pakistan in soldiers' mutilation: Jaitley "…Cover firings were provided, those who carried out this act were helped to escape at such a heavily-guarded border…," he mentioned as facts.

Asked about possible counter moves, Jaitley replied, "Place your trust on our army."