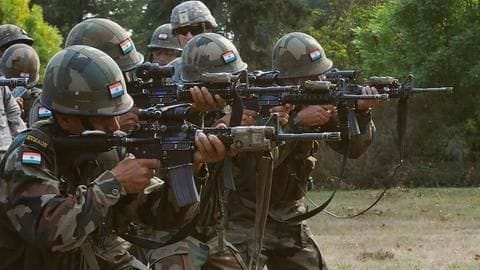 Two soldiers and a Pakistani intruder were killed as Indian personnel foiled a major Pakistani Border Action Team (BAT) attack along the LoC in Jammu and Kashmir's Poonch.

The martyred jawans have been identified as Naik Jadhav Sandip Sarjerao from Aurangabad, Maharashtra, and Sepoy Mane Savan Balku from Kolhapur, Maharashtra.

Unlike in the past, this time, there was no mutilation. A BAT team entered 600m into Indian territory at 2pm on June 22 and attacked an Area Domination Patrol team of the army, leaving the two soldiers dead.

Indian forces retaliated and killed one Pakistani intruder and injured another.

During the encounter, Pakistani troops provided cover to the intruders with heavy firing, said an army spokesman.

Series of attacks on Indian troops by BAT This is the second BAT attack that has been foiled this month, and the third BAT attack in Poonch this year.

On May 26, Indian forces foiled a major BAT attack and killed two terrorists in Uri sector of Baramulla.

Earlier on May 1, BAT members mutilated the bodies of two Indian soldiers in at Krishna Ghati sub-sector in Poonch. On the same day, forces killed three LeT terrorists including its 'chief political assassin' Majid Hamid Mir, suspected to be behind the murder of many pro-India politicians, in an encounter in Pulwama.

The others have been identified as Shakir Ahmad Jugjoo and Irshad Ahmad Dar.

When civilians pelted stones on forces later, the forces fired pellet guns on them, injuring about 40.