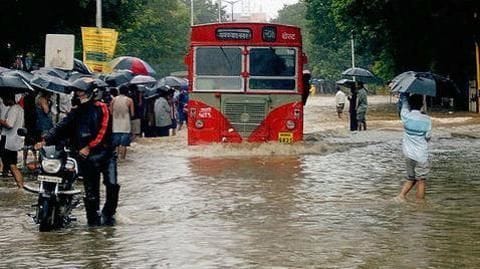 Drowning in the complaints about rains every year, Mumbai's BMC's ambitious projects that were planned after July 26, 2005 flood are not even halfway done.

According to data, out of the planned 58 projects, only 28 have been completed.

Officials said that tenders for projects are not issued till they get respective agencies' approval.

Amit Shah: BJP will contest every seat in Maharashtra polls Prior to his meeting with ally Shiv Sena chief Uddhav Thackeray, BJP President Amit Shah said that BJP will contest 2019 Assembly polls on its own in Maharashtra.

He also expressed his confidence in Devendra Fadnavis led government completing the tenure and ruled out mid-term polls.

Short of 23 seats, BJP has 122 legislators in the 288-member assembly at present in Maharashtra. A special court of Terrorist and Disruptive Activities (Prevention) Act acquitted Abdul Qayyum Shaikh of all charges 10 years after his arrest in the 1993 Mumbai blasts case.

Shaikh was arrested in 2007 on conspiracy charges. It was alleged that he connived with underworld gangster Anees Ibrahim to send arms and ammunition to India by sea.

He now hopes for a better future. There is a rail block scheduled on Harbour Line between Kurla and Vashi from 11:10 am to 4:10 pm today.

Passengers of Harbour line can travel via Trans-Harbour / Main Line till 4 pm. However, terror angle has been ruled out.

According to Security agencies, these exchanges are used by the intelligence unit of a neighbouring country to acquire sensitive military information.

The two men were held in a raid.

BMC to conduct contests to clear up Mumbai's mess Dropping from 10th position to the 29th in all-India cleanliness ranking, Mumbai will soon come up with a competition to clear up its mess.

According to Rais Shaikh, who tabled this idea, the competition pits wards against each other. This would help trigger a debate on the subject at the grassroots.

BMC's past efforts of cleaning up Mumbai have been critiqued for being half-hearted. According to studies conducted by the Tata Institute of Fundamental Research (TIFR), farming that is so widespread across the country came to India 10,000 years ago and grains such as rice, wheat and millet were grown much later.

The migrants began farming in the Indus-Ganga region and their farming techniques spread as the group moved to the east and south of the country.