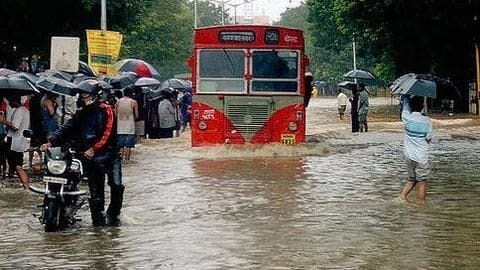 According to IMD, the adjoining areas of the city as well as the suburbs have recorded much more significant rains as compared to Mumbai today.

The Met has forecasted heavy rains in the next 24 hours for north Konkan.

Mumbaikars also witnessed season's highest tide at 4.97 metre, which is above the warning level of 4.5 metre.

Tap in for more from Mumbai. The Maharashtra government announced that it would spend Rs. 34,000 crore to write off farm loans; the waiver will help 89 lakh farmers in debt across the state.

The government has set a cap of Rs. 1.5 lakh/farmer - this means loans of around 40 lakh farmers will be waived off.

The waiver will hit state's financial deficit which could affect development projects. A 40-year-old woman who was convicted in a murder case and was in jail for last 14 years died after allegedly falling unconscious inside Byculla jail on Friday.

12 officials including one woman police officer and five prison guards have been suspended for dereliction of duty and a high-level inquiry has been ordered into the death of the convict. Pressing on how aging has become a major social challenge, the Bombay High Court ordered the eviction of two sons of an elderly couple from their bungalow as the two not only failed to look after their aged parents, but also harassed the retired couple.

The judge took note of the fact that two sons weren't bothered about their health and other needs. Four different agencies have blown the lid off several smuggling rackets in the air cargo complex at Sahar in the last two months, raising questions about the existing monitoring system.

The latest to be cracked was on Saturday when officials of the Directorate of Revenue Intelligence (DRI) seized a consignment containing 5kg of gold worth Rs. 1.39 crore and Iridium worth Rs. 30 lakh.

Mumbai is India's most expensive city According to Mercer, Mumbai's ranking is also attributable to surge in prices of food and personal care.