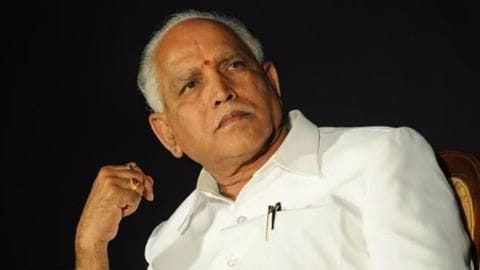 In fresh trouble for BJP in Karnataka, the Anti Corruption Bureau has registered an FIR against BJP's chief ministerial candidate BS Yeddyurappa and Parliamentary Affairs Minister Ananth Kumar. The Forensics Science lab (FSL) confirmed their voices in a leaked DVD where they are discussing payments made by local leaders to the party's high command.

How did the events unfold?

Read on to know! In February'17, BS Yeddyurappa had alleged that a diary seized by the Enforcement Directorate (ED) mentioned that Rs. 1,000cr was given as donation by CM Siddaramaiah to Congress' high command.

Following this, Siddaramaiah had challenged Yeddyurappa to prove his allegations.

Subsequently, the Congress released the CD in question wherein Yeddyurappa and Kumar are discussing payments made to central leaders of political parties.

What does the CD reveal? The CD has a conversation picked up on an open microphone between Yeddyurappa and Kumar at a BJP event.

The discussion revolves around how the diary can be used to taint Congress as nobody will believe the CM's denials.

Further, Yeddyurappa agrees that they made payments to the party command when BJP was in power in 2008-2013 'but never kept records of it'.

What was BJP's reaction after the CD was released? BJP spokesperson G. Madhusudhan later claimed Congress leaders were worried after revelations about the diary. To divert attention from that issue, they "fabricated" the CD coming out with its "edited version."

Subsequently, the state government asked the cybercrime branch to investigate. The complaint alleged that the leaders were discussing ways to destabilize the government.

The FSL confirmed the voices of the two leaders.

How did the parties react after FSL's revelations? Yeddyurappa reacted by saying, "Let them bring 100 such cases. I have the strength to face them." He alleged that government was misusing the ACB.

Congress spokesperson Dinesh Gundu Rao asked the BJP government at the Centre to remove Ananth Kumar from the cabinet.

He demanded a thorough investigation.

What does this mean for poll-bound Karnataka? It seems that due to these fresh revelations, Yeddyurappa's intentions of tainting Congress may have backfired to some extent.

Karnataka is set to go to polls early next year. BJP President Amit Shah had declared Yeddyurappa as BJP's Chief ministerial candidate in May.

In case the allegations are proven, it could be a blow to BJP as Yeddyurappa has been accused of corruption before.