The Election Commission (EC) on Wednesday will hold a review meeting on Wednesday with West Bengal observers over the issue of poll violence in the state.

The review meeting, which would be held via video conference, comes only a day after BJP President Amit Shah's Kolkata roadshow during which a clash broke out between the workers of BJP and TMC on Tuesday. 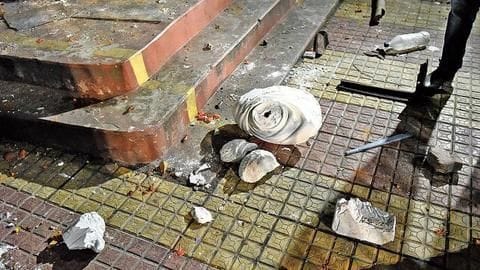 However, BJP alleged that TMC supporters first threw stones at its supporters during Shah's roadshow. TMC on Tuesday tweeted that a Trinamool Parliamentary team seeks meeting with the EC on 15 May in the aftermath of "attack on Bengal's heritage".

A BJP delegation has, however, already met the officials of the election body to complain about the violence in the West Bengal capital. BJP also demanded that CM Banerjee be barred from further campaigning, blaming her for the violence. CM Banerjee has strongly condemned the violence and the attack on Vidyasagar College, adding an inquiry will be conducted.

"It is a very unfortunate incident and an entire college was vandalized. A bust of Ishwar Chandra Vidyasagar was broken. I have kept broken parts of the bust where the original statue was there. I have never seen such political violence in Kolkata," she said.

'Writing on the wall is clear,' tweets Shah

Meanwhile, Shah took to Twitter, asking people to vote against TMC. "Writing on the wall is clear...Mamata didi has read it well... Your violence and hooliganism can no more stop the people of Bengal from reclaiming the true legacy of this great land," he tweeted.

Writing on the wall is clear and Mamata didi has read it well.

Didi, your violence and hooliganism can no more stop the people of Bengal from reclaiming the true legacy of this great land. https://t.co/QUYQ2e5FJw pic.twitter.com/CGtGkgSKj2