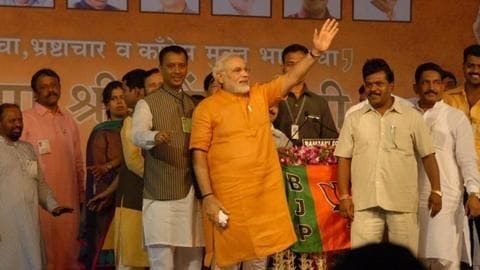 The BJP has released its election manifesto, called the "Lok Kalpan Sankalp Patra", for the upcoming Uttar Pradesh Assembly Elections.

BJP President Amit Shah, who gave a speech in Lucknow to mark the occasion, not only promised to develop Uttar Pradesh, provide freebies, and investigate the reported Hindu "exodus", but also pledged to work towards the construction of the controversial Ram Mandir.

Criticism of SP and BSP

BJP hits out at SP and BSP regimes Shah went on to say that UP was 15 years behind other states in terms of development, and promised that the BJP, if elected, would get UP up to speed in just five years.

The BJP's promises of development Shah said that development schemes promised in the BJP election manifesto would see implementation without any discrimination on the basis of religion or caste.

The manifesto also said that BJP would repackage some existing developmental schemes in UP, and also provide subsidized electricity to the poor.

The BJP's promises of agricultural development The BJP, Shah said, would set up a fund of Rs.150 crore for agricultural development.

The manifesto promised a complete loan waiver for small farmers, while also pledging that zero interest loans would be given to small farmers and labourers in the informal sector.

Shah also said that special focus would be given to the drought-hit, scantily-developed Bundelkhand region of Uttar Pradesh.

Ram Mandir, triple talaq and others The manifesto said that the BJP was "firm" on the Ram Mandir issue and temple construction efforts would be made "under constitutional provisions".

On the issue of triple talaq, the BJP promised to take the opinions of Muslim women and present the same in court.

On the alleged Hindu 'exodus' in Kairana, district collectors and police would be held responsible for any forced migration.

BJP promises to focus on education The manifesto said that the BJP, if elected, would set up 10 international level universities.

It promised free education till Class 12, and college fee waivers for meritorious students.

Shah said that the BJP would set up a Rs.500 crore Baba Saheb Ambedkar scholarship for students from economically weak backgrounds.

The manifesto also promised free Wi-Fi for all colleges and universities.

Law and order a top priority for the BJP Keeping law and order as a top priority, the BJP promised to fill up the 1.5 lakh vacancies in the UP police force.

It promised the setting up of 25 special courts aimed at expediting cases under the SC/ST Prevention of Atrocities Act.

It promised to set up a special task force to tackle corruption and organized crime, and women battalions for women's security.

Lok Sabha elections schedule could be announced in March first-week