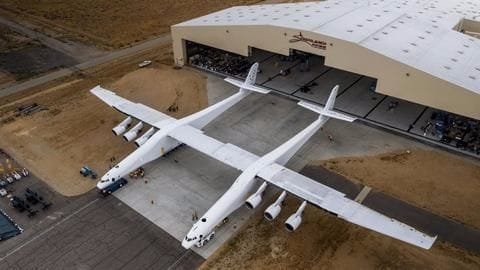 Microsoft co-founder Paul Allen has completed work on the world's largest airplane, the Stratolaunch. The beast emerged out of its California hangar for the first time on May 31.

The 28-wheel, 50-feet-tall machine has a wingspan of 385 feet and is designed to release rockets which will carry satellites into space. No surprise then, that it can carry over 500,000 pounds (226,800kg) of payload.

How big is the world's biggest airplane? For comparison, the world's largest airliner, the double-decker Airbus A380, weighs 610,000 pounds.

The 385-feet wingspan is longer than a National Football League field.

The project was announced in 2011 Allen announced plans for the aircraft - nicknamed the Roc after a mythical bird big enough to carry an elephant in its claws - in December 2011.

"We have many challenges ahead of us, but by the end of the decade Stratolaunch will be putting spacecraft into orbit," he had predicted.

The initial testing plans were scheduled for 2015, but were apparently delayed.

From vertically-launching rockets to "air launch" Stratolaunch, in collaboration with Orbital ATK, plans to "air launch" the Pegasus XL, a rocket that can deliver small satellites to orbit.

Pegasus would be tied to the underbelly of Stratolaunch, which would fly up with it, and then would drop and "air launch" it from an altitude of about 35,000ft.

Stratolaunch team believes this technology is cheaper and more efficient than vertically-launching rockets.

Jean Floyd, Stratolaunch CEO, says the company is planning to have a launch demonstration in 2019. "Over the coming weeks and months, we'll be actively conducting ground and flight line testing," Floyd said.

US forces kill ISIS chief: Here's how the operation unfolded

Who is Baghdadi, the ISIS chief reportedly killed by US?