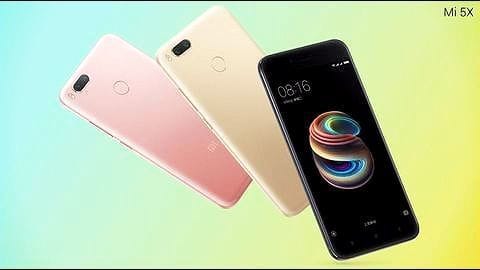 Chinese electronics giant Xiaomi has launched yet another mid-range smartphone, the Mi 5X, in China.

It is powered by Qualcomm Snapdragon 625 processor with 4GB RAM and 64GB internal storage.

It runs on the much-anticipated MIUI 9, which was also launched at the event.

Mi 5X would be available in China from 1 August at CNY 1,499 (about Rs. 14,200) in three color options: Black, Gold, and Rose Gold/Pink. It comes with a fingerprint scanner on the back. The highlighted feature of the phone is the MIUI 9. MIUI ROM, the Android-based firmware, is the first product launched by Xiaomi in 2010.

It is available in 55 languages; it is used in 142 countries and has over 2.8 billion active users.

The latest iteration of the popular customized Android version is MIUI 9 based on Android 7.0 Nougat.

Comes with more refinements and under the hood improvements Other highlighted features of MIUI 9 Xiaomi is also focusing on Artificial Intelligence; MIUI 9 has an AI-based assistant; Xiaomi says it is smart enough to "find anything and everything."

The 'smart app launcher' can launch apps based on on-screen elements; for example, it suggests Google Maps if a user is having a conversation about some location. The public version would be released to these devices around September.

#LeakPeek: Xiaomi's Mi Mix 4 will be a game changer

Xiaomi to launch Mi 9 today: Here's everything to know