Tainted Australian cricketer Cameron Bancroft did not have the best of return to competitive cricket.

The player, who saw his nine-month ban end on Saturday, lasted for just three deliveries in the Big Bash League.

Bancroft was handed the ban in relation to a ball-tampering scandal against South Africa earlier this year. The disgraced 26-year-old cricketer, saw himself getting picked by the Perth Scorchers team for the game against Hobart Hurricanes on Sunday.

He did not play club cricket since his involvement in the ball-tampering scandal.

Bancroft came in at number four and managed to last three balls. 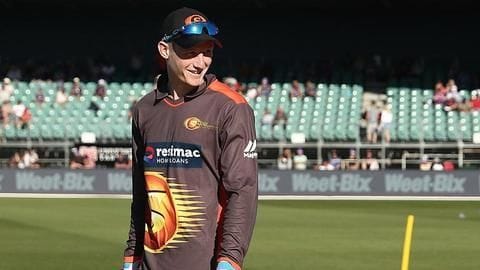 Meanwhile, a handful of fans in the stadium weren't happy to see Bancroft back in action.

After lasting for minutes on the pitch, Bancroft received a warmer round of applause, while returning back to the hut.

Hobart chased down the target easily.

WATCH: A few boos for Bancroft

A few boos from Launceston crowd for Cameron Bancroft as he walks out to bat with @ScorchersBBL in trouble at 3/16 #BBL08 pic.twitter.com/9NSCfGZoCA

Bancroft was axed by CA alongside Smith and Warner

Bancroft was axed by Cricket Australia alongside Steve Smith and David Warner. The former was caught trying to use sandpaper to alter the ball against South Africa. Smith and Warner were handed a 12-month ban period for their role in the scandal. In a recent interview to Fox Sports, Bancroft said that it was Warner who suggested him to alter the ball against SA.

When did Cameron Bancroft's ban end in relation to the ball-tampering scandal?

Cameron Bancroft's ban ended on Saturday after a nine-month period in relation to the ball-tampering scandal earlier this year.

How many runs did Bancroft score on return?

Bancroft lasted for just three balls and scored two runs on return for Perth Scorchers in the BBL.

How did Bancroft's side fare in Sunday's match in the BBL?

Bancroft's side Perth Scorchers fared poorly in Sunday's match in the BBL. They lost to Hobart Hurricanes by six wickets.

How was the crowd reaction towards Bancroft?

Certain parts of the Tasmanian crowd booed him as he walked into the field.