Hardik Pandya or Vijay Shankar, who will play World Cup? 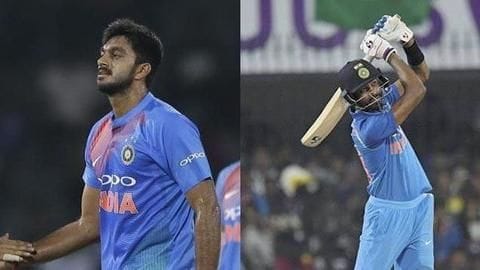 With less than 100 days to go for the World Cup, India are still looking for an ideal all-rounder.

Although Hardik Pandya fits in the squad, his injuries of late, along with inconsistent performance, have led to putting his position in doubt.

Meanwhile, Vijay Shankar has also risen up the ladder to become a contender for the tournament.

We analyze who's World Cup favorite. The man from Tamil Nadu, who is a batting all-rounder, has so far played six ODIs, scoring 91 runs at an average of 45.50.

However, he has failed to make an impact with the ball, claiming just two wickets, which came in second ODI against Australia.

Shankar rise to fame in second ODI against Australia On Tuesday, Shankar scored 46 off 41 balls to display clinical batting.

Although Shankar bowled just nine deliveries, his opening over went for 13 runs, including three fours.

Virat Kohli surprised everyone when he decided to give Shankar the final over, with Australia requiring just 11 runs. Pandya is known as a prolific finisher.

Being a hard-hitter, Pandya can smack the ball out of the park, especially against spinners, which was evident during the Champions Trophy 2017. Pandya's injury has taken some toll on his performance.

In his last 10 ODIs, he has claimed just nine wickets at an average of 44.

Furthermore, he was involved in an off-field controversy which still has its effects on him.

Shankar leads the race, but Pandya can still sneak in As per the stats above, it is clear that Shankar is the right guy for the all-rounder's spot in the World Cup squad.

However, there is still room for Pandya, depending on the performance of Ambati Rayudu.

If Rayudu fails to seal his spot in the middle-order, Pandya can sneak in, giving the side an edge with an extra all-rounder.

When did Vijay Shankar make his ODI debut?

Shankar made his ODI debut against Australia at Melbourne in January 2019.

Which IPL team does Vijay Shankar play for?

Shankar plays for Sunrisers Hyderabad (SRH) in the IPL, currently.

Which was Hardik Pandya's last ODI?

Which Ranji team does Pandya play for?

Anoushka Shankar undergoes hysterectomy, says "no longer have a uterus"