Australia have continued to grow from strength to strength as they sealed the ODI series against Pakistan.

The Aaron Finch-led side have taken a deserving 3-0 lead in the five-match series.

After beating India 3-2 earlier, Australia capped off another superb show.

The spinners in particular were impressive. 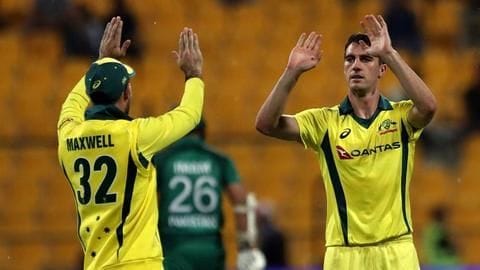 Australia were in trouble at the start, before Finch (90) and Peter Handscomb (47) got together to add 84 runs.

Finch rallied on and was dismissed in the 42nd over, leaving his side at 188/5.

In reply, Pakistan were 16/3, and they could never recover from there on. Finch batted sensibly and took his time. He hit five fours and a six in a 136-ball stay.

Finch is one four away from getting to 400 boundaries in the format.

He is also nine maximums away from registering 100 ODI sixes.

Australia continue their dominance over Pak and other feats This was Australia's second successive ODI series win this year.

Maxwell registered his 17th career ODI fifty and a fifth against Pakistan.

A new record for the Aussies

It is first time in 15 years that Australia have won 6 consecutive ODIs in Asia. They won three in a row in India and now have won three vs Pak in UAE. #PakvAus

By what margin did Australia beat Pakistan in the third ODI?

Australia beat Pakistan by by 80 runs in the third ODI.

How does the series stand at the moment?

Australia lead 3-0 in the five-match series.

How many runs did Aaron Finch score?

How many wickets did Adam Zampa take?