MI were in all sorts of trouble, before Kieron Pollard jailed them out with a late flourish.

SRH couldn't quite stay in sync with the bat after Alzarri Joseph took six wickets on debut.

Alzarri Joseph recorded the best bowling figures in IPL history (6/12). He broke the record held by Sohail Tanvir (6/14) in 2008 against CSK.

A dream debut for Joseph!

Some impressive numbers notched by players He now has 161 IPL sixes. Pollard went past Yusuf Pathan in terms of career IPL sixes (159).

Mohammad Nabi (1/13) picked up his seventh wicket this season.

David Warner and Jonny Bairstow added 33 runs for the first wicket. Prior to this, the two had smashed 50-plus partnerships in the first four matches for SRH. However, the two batsmen surpassed the 500-run mark as a pair (510) at a strike-rate of 172.16.

Bairstow gets dismissed by a leg-spinner for fifth successive time 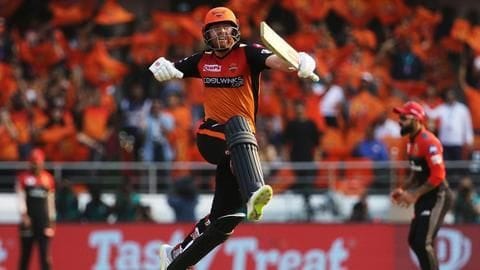 Bairstow has been dismissed by a leg-spinner for the fifth successive time in IPL 2019. Siddarth Kaul (2/34) is two wickets away from registering 50 scalps in IPL. 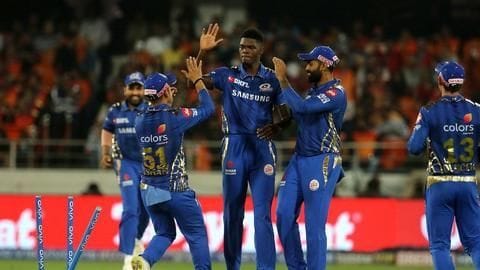 Kaul was pick of the bowlers for SRH.

In reply, the hosts lost their openers quickly and then the middle order suffered against MI's top quality attack.

A big moment for Alzarri Joseph

Who won the match between SRH and MI?

How many runs did Kieron Pollard score versus SRH?

How many wickets did Alzarri Joseph take in his debut match?