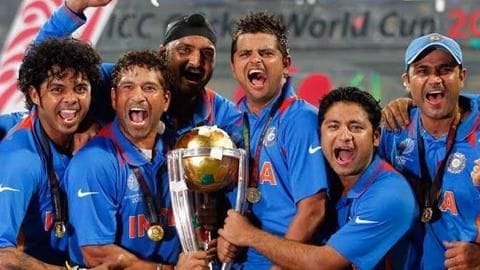 As India prepare themselves for the 12th edition of the ICC World Cup, they would look to win their third title to become the second most successful team in the history.

As they aim to script a historical chapter, there have been a number of top moments for them in the tournament to date.

Here we have a look at some of those moments.

The 1987 World Cup saw him become the first player to claim a hat-trick in World Cup.

It was in Nagpur, against New Zealand, when he dismissed Ken Rutherford, Ian Smith and Ewen Chatfield on consecutive deliveries.

Interestingly, all the three batsmen were bowled, and also three different stumps were broken for the three .

If one remembers, the 1996 World Cup saw Sachin Tendulkar at his sheer best, scoring 523 runs in seven matches as he steered India to the semis.

It was followed by another brilliant campaign in South Africa in 2003, where he once again became the top-scorer, with 673 runs in 11 innings, leading India to the final.

However, he failed to grab the title.

When it comes down to India-Pakistan, it's always an intense encounter. Things had become even fiercer during the World Cup.

The clash during 2003 World Cup was the most anticipated one, with Pakistan trailing 0-3 against them in World Cup.

While Saeed Anwar scored a prolific 101 to steer Pakistan to 273/7, it was Tendulkar's 98 that saw India go past by six wickets.

While India winning the 2011 World Cup itself was a memorable moment for India, the victory was made even more special by Dhoni.

While Gautam Gambhir (97) had already helped India recover from a spot of bother, Dhoni played a fine innings of 91*.

We witnessed a picturesque finish, courtesy Dhoni's match-winning six, which is still cherished by millions of fans, across the globe.

India's best World Cup moments undoubtedly have to be their twin title wins in 1983 and 2011.

It was Kapil Dev, whose brilliant leadership skills and exquisite all-round abilities that allowed his side to triumph defending champions West Indies in England.

28 years later, it was MS Dhoni, who came up with sound leadership qualities, to help India clinch their second 50-over World Cup.

Australia are undoubtedly one the greatest teams in cricket.

They were the defending champion in 2011, having won the title three terms in a row since 1999.

However, their magical run was ended by India in the quarters.

Having restricted them to an average total of 260/6, India chased it down with five wickets remaining, as Yuvraj Singh's winning four was a memorable moment.

Who was India's coach during 2011 World Cup?

India were coached by Gar Kirsten in 2011 World Cup.

How much did Sachin score in 2011 World Cup final?

Who was India's highest wicket-taker in 2011 World Cup?

Zaheer Khan claimed the most wickets of 21 in 2011 World Cup.

When does the World Cup 2019 get underway?