Premier League giants Manchester United are off to a flying start in the 2019-20 season, as they hammered Chelsea 4-0 at Old Trafford in Manchester on Sunday.

This was United's 79th win over Chelsea overall. Notably, it was also the first EPL game, for Frank Lampard as the manager of the Blues.

Here is the detailed match report. The opening quarter saw Chelsea getting off to a strong attack in the fourth minute, when Tammy Abraham's strike came off the bar.

However, the 17th minute saw Kurt Zouma wrongly catching Marcus Rashford inside the box, as after consulting VAR, a penalty was awarded, as Rashford converted it for the opener.

Chelsea come up with three more attacks before half-time 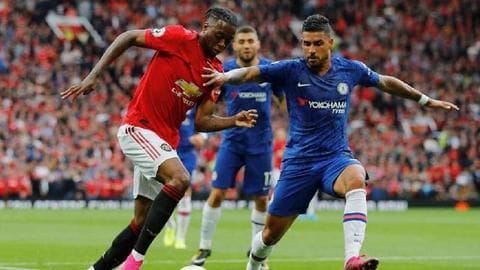 Prior to half-time, Chelsea came up with three more attacks, but to no avail.

The 35th minute saw Ross Barkley shooting it wide, followed by another from him, four minutes later, only to be saved by goal-keeper David de Gea.

In the very next minute Emerson fired a powerful shot, only to be saved once again by the crossbar, as United led at half-time. 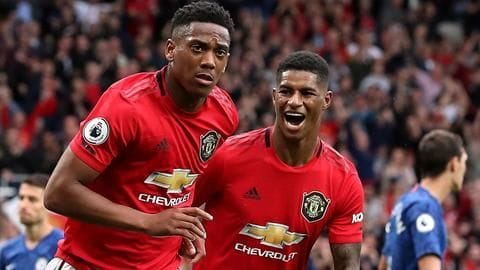 The start of the second half saw Emerson's another attack being saved by goal-keeper, in the 56th minute.

However, it was in the 65th minute when Andreas Pereira came up with a tactical cross to Martial, who put it in for United's second.

Two minutes later, Pogba's brilliant pass found Rashford one-on-one with the keeper and he made no mistake to score his second. The final quarter saw nothing but a relentless attack from United, as the Blues defense had a tough time containing them.

It was in the 81st minute when Pogba's another great assist allowed newcomer Daniel James to score his opening goal in his debut match.

Chelsea's final attack came in the 94th-minute from Emerson, only to be saved by David de Gea.

Rashford adjudged Man of the Match

We have some more good news, @MarcusRashford — you've been voted as today's Man of the Match! 🌟#MUFC #MUNCHE https://t.co/7es0sL8Itu pic.twitter.com/LLJz0pBJsM

United take on Wolves on August 20

With this opening win, United are currently placed second in the table, behind current leaders and defending champions Manchester City. Up next, United would travel to West Midlands to take on Wolverhampton Wanderers at the Molineux Stadium, at 12.30 AM IST on August 20.

How many times have Manchester United won the EPL?

How many times have Chelsea won the EPL?

Chelsea have won the EPL on six occasions.

How old is Marcus Rashford?

How old is Frank Lampard?