Former India captain MS Dhoni, who is on a sabbatical from cricket to serve the army, did not back out to play his favorite sport with kids even while on duty.

Dhoni was spotted playing cricket with kids in the Leh district, where he is currently stationed.

This viral picture of Dhoni was posted by his Indian Premier League franchise, Chennai Super Kings.

As per the photo posted by CSK, Dhoni is seen playing cricket in a basketball court in Leh with kids. While no video is available, the photo has gone viral. Meanwhile, CSK have captioned the picture as 'Different field. Different gamepLeh'. This is not the first time, this month, when Dhoni's actions have been grabbing eyeballs.

On August 4, Dhoni was seen playing volleyball with his Indian Territorial Army battalion.

The video of the same had gone viral on social media.

While the location of the same was not disclosed, he was seen playing the sport in a normal dress, rather than army uniform.

Dhoni decided to take a break to serve army Dhoni was ranked Honorary Lieutenant Colonel by the Indian Territorial Army in 2011. He remains only the second Indian cricketer after Kapil Dev to receive the rank.

Meanwhile, it was reported last month that Dhoni had decided to take a break from cricket to serve the army.

As a result, he did not participate in India's just-concluded white-ball series against the Windies.

Dhoni's return date not announced yet 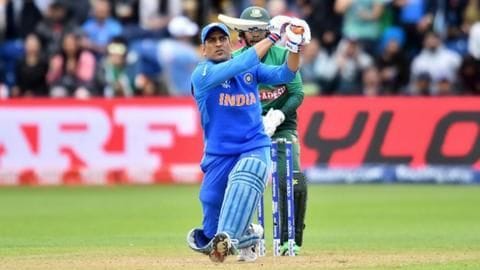 While the fans are curious to know when would Dhoni return to resuming his duties with Team India, there has not been any confirmation on that part as of now.

However, it is being reckoned that Dhoni might join the team during the upcoming series against South Africa, starting September 15.

In his absence, Rishabh Pant was given an opportunity to prove his mettle.

How old is MS Dhoni?

When did Dhoni make his ODI debut?

Dhoni made his ODI debut on December 2004.

When did Dhoni make his T20I debut?

How many ODIs has Dhoni played to date?

Dhoni has played 350 ODIs to date.