Kim Clijsters to come out of retirement in 2020 Tennis legend and former four-time Grand Slam champion Kim Clijsters is all set to return to professional tennis for the second time.

Clijsters announced that she would be playing competitive tennis from 2020.

This would be Clijsters' second return to tennis following her retirement, having earlier made a comeback in 2009 after calling it quits in 2007.

Clijsters announced her second retirement in 2012 Following her first comeback in 2009, she went on to win three more Grand Slams.

After an average performance in the next couple of years, followed by multiple injuries, she announced her second retirement in 2012.

"Mothers are trying to compete at the highest level"

"Mothers are trying to compete at the highest level - that is the inspiration. I don't really feel like I want to prove something. I think for me it's the challenge," Clijsters said in a video on Twitter.

Clijsters is eyeing to get fit 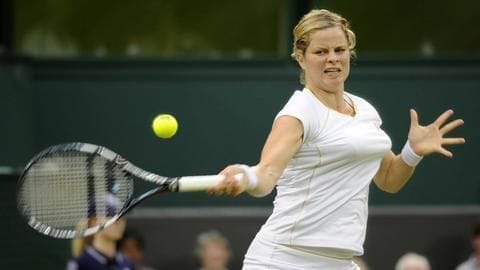 As of now, Clijsters has revealed that she would be aiming to get fit enough to compete at the highest level.

It is then that she would consider if she can reach the level to compete in the Grand Slams.

"I will continue to push myself each goal I set," said Clijsters, asides asserting that she would maintain flexible scheduling.

Clijsters plays basketball with her daughter to keep herself fit Clijsters has credited her daughter Jada for motivating her to make a comeback, as they both play basketball together to train and keep herself fit.

"It's great to be an example of what you have to do and not do to be an athlete, and get the best out of yourself," Clijsters further reckoned. Clijsters said that she won't play the entire season as her children are still young and she cannot stay away from them for long.

"For my youngest, it is not really a big deal, but for my eldest, it's important to not take her away from school, her friends and her basketball team too much. We need to find a balance," she concluded.

Clijsters hits the court again from 2020

Hi guys, I’m excited to finally be able to share this news with you… #wta #2020 pic.twitter.com/tm7jYMEwrH

"Kim Clijsters ranks among the greats of the game and her return to the Tour is exciting news for the WTA family and tennis fans around the world," WTA chairman Steve Simon opined upon the return of Clijsters to professional tennis, as reported by BBC.

How old is Kim Clijsters?

Which Grand Slam is most dominated by Clijsters?

Clijsters has dominated US open, having won three titles,

How many children does Clijsters has?

Clijsters has three children, a daughter and two sons.

Who is Clijsters married to?

These women's tennis records could be scripted in 2020

Had five operations within 1.5yrs: Kim Kardashian on pregnancy complications