Rohit Sharma should play his natural game in Tests: Bangar 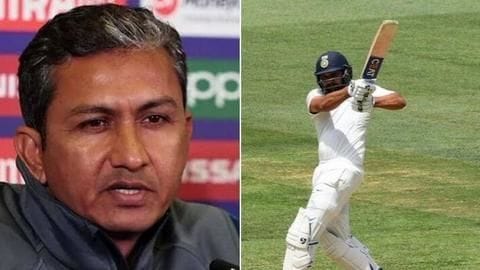 Rohit Sharma will look to dominate the proceedings after the national selectors picked him as the opener for the upcoming Test series against South Africa.

While he has been a force to reckon with in ODIs and T20Is, his run in Tests has been highly inconsistent. Bangar said in order to script success in Tests, Rohit should play his natural game.

However, Bangar warned that it would be a challenge for him to open in the longer format, as he has never done it before.

"At the moment, there is no place [for Rohit] in the settled middle-order in the Test team," said Bangar.

Getting to bat against hard ball would be an advantage

"But, the advantage is that he will get to bat against a hard ball with plenty of gaps in the field. He will also not have to wait for his turn to bat, which will save his mental energy," Bangar further said to ESPNCricinfo.

Rohit has not been able to shine in Tests Considering Rohit's performance in Test cricket, out of 27 matches, he has batted in the middle-order in 25 of those.

Meanwhile, he has also batted at number three in Tests, scoring just 107 at an average of 21.40.

Rohit has made the most impact batting at number six

Rohit's favorite batting position in Tests has been the number 6 spot, where he has scored 1,037 runs in 16 matches, at a sound average of 54.57, including three centuries and his top score of 177.

Is it wise to promote Rohit as opener? Taking only stats into account, Sharma's performance in Tests has been just about average.

However, it is his inconsistency that has troubled him in the past.

As for him being promoted as an opener, while he is a regular opener in the white-ball cricket, the author has some reservations.

Moreover, having not done it before, it would be an uphill task.