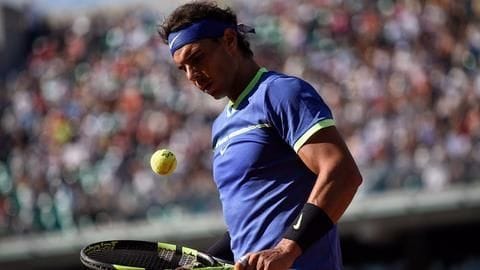 World number four Rafael Nadal entered the finals of Roland Garros for the tenth time in his career. He will face Stan Wawrinka on Sunday.

In case Nadal wins, he will be the first player to win the French Open for a record tenth time.

If he wins 15th Grand Slam, will this make Nadal one of the greatest tennis players of all time?

Nadal's record at the French Open

Since his debut at the French Open in 2004, Nadal has reached nine finals till 2016 from his 12 appearances and have won nine of them. He is the only player in the world to have won nine titles of one major Grand Slam.

The toughest Grand Slam of all The French Open is regarded as the toughest Grand Slam of the year, given the unpredictability of the slow surface and windy conditions.

It is also the only Slam with no retractable roof on their main court, distracting the game when it pours.

Nadal has managed to successfully beat these conditions nine times, five times he has done this consecutively.

The clay not for the Champions?

A tough task for the 31-year old Nadal's career has been hit with knee and foot injuries from time to time. As a 17-year old, he was forced to withdraw from his first French Open.

However, he has managed to overcome these injuries and dominate the Roland Garros.

In 2016, it was first time that he withdrew from the tournament owing to an injury since his debut in 2004.

Having proved his dominance on clay, the 31-year old has continued to remain the favourite at the clay Grand Slam even today. After a shocking loss in 2009, Nadal managed to bounce back and win back-to-back five titles at Paris.

Nadal's ability to re-write the script Nadal's ability to maintain his hunger for the clay tournament was instilled in him when he was a child and remains with him till this very day.

He has proved all his critiques wrong by getting up after every fall and also proved his dominance over the great Roger Federer.

The Spaniard has won 13 of the 15 clay encounters between the two.

10 consecutive years of winning more than one Slam title, 30 Masters 1000 singles titles and a record 10th final at Roland Garros. There could be no reason to doubt Nadal's abilities. His records will be tough to beat for future generations, if not impossible.

KXIP clinch a thriller against RR: List of records broken