China: 25 trapped in gypsum mine collapse 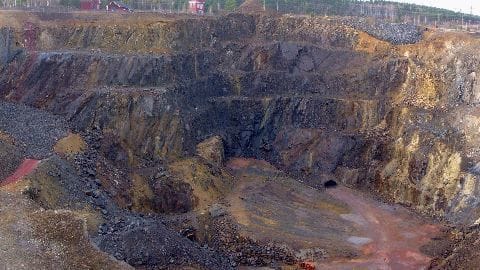 25 workers were buried under rubble, when a gypsum mine collapsed in China's Shandong province today.

At least 29 people were working in the mine when it collapsed early morning on December 25.

Four workers were rescued by authorities while rescuers were struggling to reach the others.

This is the latest in a series of industrial accidents in China in the last few years. Chinese industrial safety standards have been widely criticized by labor organizations and governments.

Explosions and fires caused by industrial accidents have killed hundreds in China in recent years.

Experts state that the root cause of these accidents lies in "toothless enforcement" of industrial safety standards.

Workplace safety has been a persistent problem in China, compounded by inadequate enforcement of regulations, inspections and training. Over 80 people were killed in a fire that engulfed a toy factory in China's south-eastern Shenzhen city.

Authorities stated that a majority of the deaths were due to smoke inhalation as most of the doors and windows were locked.

He was fined and imprisoned for five years.

172 killed in coal mine flood in Xintai One hundred and seventy-two miners were killed when a coal mine was flooded in the Xintai province in China.

The region received high rainfall triggering a flash flood that engulfed the mine.

Investigations revealed, that a dam that was meant to hold back flood waters broke due to sub-standard construction.

Civil society groups blamed the mine owners stating that the accident was "completely avoidable". A retaining wall of a waste iron ore reservoir collapsed after torrential rains, engulfing a nearby village and a marketplace in a mud slide.

Official figures stated that 277 people were killed and 33 were injured in the accident.

Investigations revealed that the mine was being illegally operated by the Tashan Mining Corporation who failed to get a license for operations.

74 killed in Shanxi coal mine blast A blast in a coal mine in Shanxi province killed 74 miners and injured 114 others when a fire broke out in one of the shafts.

Authorities said at least 400 workers were in the Tunlan Coal Mine at the time of the blast and most managed to escape unharmed.

Investigators said Tunlan had a good safety record and the incident was "unfortunate".

The most dangerous mines in the world

The Chinese government released a statement in 2009 stating that over 3200 people were killed in mining accidents in 2008. The figures made Chinese mines the most dangerous workplaces in the world. On 2 June 2013, a fire at a poultry processing plant in Dehui in Jilin province, China killed at least 119 people.

Authorities found that explosions in the factory's warehouse started the fires and the exit doors of the factory were locked, trapping the workers inside.

Sources stated that an ammonia leak may have been responsible for triggering the explosions. At least 68 people were killed and about 187 injured in a major blast at a car parts factory in eastern China that supplies the country's massive automobile industry.

A preliminary investigation suggests a dust blast caused the explosion at the plant.

Safety experts stated that the absence of good ventilation a buildup of heat, oxygen and metallic dust sparked the explosion. Over 173 people were killed and 700 were injured in twin blasts that rocked the port of Tianjin in China.

Authorities stated that the blast occurred due to hazardous materials stored in a shipping container in the port.

With the first rains after the initial explosions white chemical foam covered the streets.

Citizens complained of burning sensations and rashes on exposure to the rain.

China: 25 trapped in gypsum mine collapse 25 workers were buried under rubble, when a gypsum mine collapsed in China's Shandong province today.

At least 29 people were working in the mine when it collapsed early morning on December 25.

Four workers were rescued by authorities while rescuers were struggling to reach the others.

This is the latest in a series of industrial accidents in China in the last few years.

12 killed in China coal mine accident Twelve people were killed in a coal mine accident in China, in the latest incident in the country's notoriously dangerous industry.

According to Xinhua news, coal gas flooded a colliery in Baishan, in the northeastern province of Jilin, killing the miners working inside.

One worker survived the incident and was rescued by authorities.

The cause of the accident is yet to be ascertained.

19 killed in coal mine cave-in in China According to a statement released by the owner of a coal mine, at least 19 miners have been killed in China's Shanxi province after a coal mine caved in.

The accident occurred on Wednesday night in a colliery of the Anping Coal Mine in Shanyin County, said a statement by Shanxi Datong Coal Mine Group.

129 miners were working underground when the incident happened.