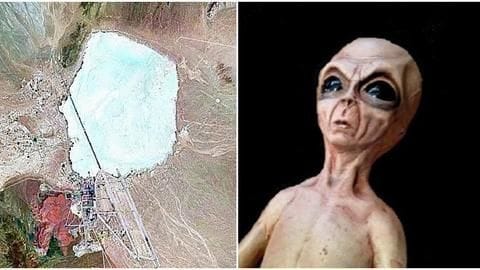 Call it a mystery, or a hoax, the top-secret US military base "Area 51" has fueled many "alien" stories for decades.

Restless for some answers, over 8 lakh people are planning to "storm Area 51" in an attempt to "see them aliens."

A Facebook event called 'Storm Area 51, They Can't Stop All of Us,' details their plans.

Here's what it's all about.

'We can move faster than their bullets' The event is hosted by a group of shitposting, edgelord memers, who have marked September 20 as the date when they plan to storm the top-secret base in Nevada.

"We will all meet up at the Area 51 Alien Center tourist attraction and coordinate our entry. If we naruto run, we can move faster than their bullets. Let's see them aliens," the description reads.

Interestingly, at the time of writing this report, over 8.55 lakh people have marked themselves as 'going' to the event. People have been instructed to fly out to Lincoln Country, Nevada, and then proceed to enter the facility at 3 am. If you haven't already caught on, the event is just satire, but the government doesn't want to take any risks and deemed it important to issue a warning.

Air Force spokesperson Laura McAndrews said, "[Area 51] is an open training range for the US Air Force, and we would discourage anyone from trying to come into the area where we train American armed forces."

McAndrews also slipped in a sly threat to anyone who plans to enter the facility, by saying, "The US Air Force always stands ready to protect America and its assets." However, she didn't offer any explanation on how officials would handle potential intruders.

ICYMI: Here's what Area 51 is all about For decades, conspiracy theorists have believed that Area 51 is a secret facility where the United States government keeps confidential information about aliens and UFOs.

The US government has time and again denied these claims, but given that details of the military base are never revealed to public, the rumors just keep coming.

The actual function of 'Area 51' remains unknown to this day.

When is the 'storm Area 51' event going to be held?

How did the 'Area 51' conspiracy start?

No one knows how the conspiracy came to be, but the rumors were rooted in the fact that the government had kept operations at 'Area 51' very secret. The rumors were strengthened by the 1996 film 'Independence Day' where Area 51 is the facility where aliens are housed.

Who started the event?

The event was started by three Facebook meme pages called: "Shitposting cause im in shambles," "SmyleeKun" and "The Hidden Sound."

What does the government plan to do to stop this?

Spokesperson of the United States Air Force Laura McAndrews has maintained that they will protect the area and has discouraged people from entering the facility.

Area 51 raid to be live-streamed. Will visitors spot aliens?