On Thursday, United Kingdom Prime Minister Boris Johnson announced that a Brexit deal has been negotiated between the UK and the European Union.

Johnson said that they have a "great new deal" and the Parliament should get Brexit done on Saturday.

The deal negotiated between the UK and EU will require an approval from both Parliaments. Johnson tweeted, "We've got a great new deal that takes back control."

Johnson urged the UK Parliament to "get Brexit done" on Saturday when British legislators will vote on the deal during a special sitting of the House of Commons.

We’ve got a great new deal that takes back control — now Parliament should get Brexit done on Saturday so we can move on to other priorities like the cost of living, the NHS, violent crime and our environment #GetBrexitDone #TakeBackControl

In a letter addressed to the European Council President Donald Tusk, Juncker wrote, "It is high time to complete the withdrawal process and move on, as swiftly as possible, to the negotiation on the European Union's future partnership with the United Kingdom." 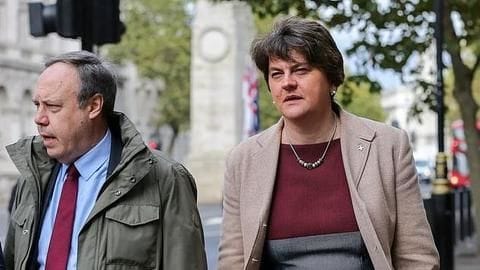 However, the Democratic Unionist Party said that it cannot sign off on the deal "as things stand." The DUP—a political party in Northern Ireland—said it couldn't support suggestions on customs and consent issues in Johnson's deal and "there's a lack of clarity on VAT." The deal came days after intense back-and-forth negotiations between London and Brussels and just ahead of UK's scheduled departure from the 28-member bloc on October 31.

Previously, the UK parliament had rejected a Brexit deal, negotiated by former PM May, three times.

PM May resigned earlier in the month of May, voicing regret over failing to deliver Brexit. Johnson assumed office on July 24. Shortly after the news broke, the British pound was noted to have surged, standing at $1.29 for the first time since May.

The pound notably climbed against the euro standing at €1.16.