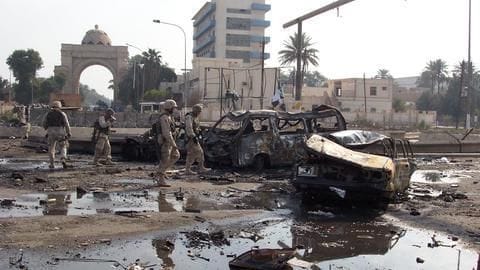 A car bomb detonated in the vicinity of a convoy of buses carrying evacuees from besieged rebel-held towns on the outskirts of Aleppo, killing over 100 civilians.

Several rebel fighters who were guarding the convoy, which was ferrying civilians from al-Foua and Kefraya to government-territory, were also among the dead.

The bomb exploded at the checkpoint where the handover of civilians was to happen.

Details of the bombing The bomb allegedly went off in a truck that was disguised as aid-truck distributing chips. It drove up beside the convoy, detonating at 3:30 PM local time.

Several buses and cars in the convoy were destroyed by the impact of the explosion. 112 people died in the attack, so far.

The convoy was carrying 5000 Shia civilians, toward safety in government held territories. The Four Towns deal was a deal brokered by Qatar, Iran, al-Qaeda/rebel forces and Hezbollah to facilitate the evacuation of civilians from towns held by rebels and government forces.

It was meant to facilitate the exchange of Shias under siege by al-Qaeda and rebel forces, and Sunnis who are besieged by government forces.

It involves exchanging civilians by bus at pre-determined checkpoints.

The evacuation of Kefraya and al-Fuaa, the last Shia pockets in the North, would mean Shias would no longer exist in the rebel-held North. Observers have called it a "forced demographic change...under international patronage."