PM Modi in Russia: Agreement on Kudankulam to be finalized 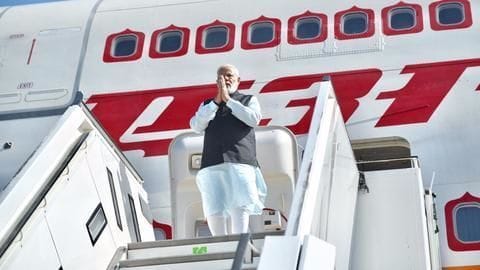 Completing fruitful visits to Germany and Spain, PM Modi is currently undertaking a visit to Russia, as a part of the third leg of his four-nation trip.

Modi along with Russian President Vladimir Putin will hold the 18th Indo-Russia summit in St.Petersburg today.

The visit is expected to reaffirm India-Russia friendship and finalize the agreement for the supply of nuclear reactors to Kudankulam.

Why is this visit important? Completing 70 years of diplomatic relations, assistance from Russia was instrumental for India to set up its early military, technological and industrial base.

The visit looks towards reaffirming the ties, in the background of India's tilt to the US and Russia's growing affinity to China and Pakistan.

To Russia with love

In a piece authored in the Russian daily, Rossiyskaya Gazetta, PM Modi writes, "India-Russia relations ... have withstood the test of time, and grown", to which Putin replied, "Our peoples have always had mutual sympathy and respect for each other's spiritual values and culture."

What's on the PM's agenda? The PM's visit will last from May 31-June 2. , PM Modi is also scheduled to visit Piskariovskoe cemetery to honour Russia's martyrs in World War II. He is also expected to interact with President Putin at his official residence, the Konstantin Palace.

PM Modi is also set to represent India at the St. Petersburg International Economic Forum, as the 'guest of honor'.

What could get done? PM Modi had earlier noted that both countries would take forward the discussions from BRICS Summit, Goa, 2016.

India and Russia are also expected to sign agreements in areas including science and technology and trade.

India and Russia signed multiple deals under the auspices of the Brazil, Russia, India, China (BRICS) Summit in 2016 including joint ventures for manufacture of Kamov-226 T helicopters and Admiral Grigorovich-class stealth frigates. They also agreed on a "zero tolerance policy towards terrorism." The KNPP, built by the Nuclear Power Corporation of India Ltd. (NPCIL) in collaboration with Russian state-company Atomstroyexport is scheduled to have 6 1000 MW VVER-1000 reactors.

Russia has already supplied 4 reactors. While the signing of Agreements for supply of units 5 and 6 was scheduled for 2016, the line of credit offered by Russia proved to be a hurdle. While India-Russia ties have more-or-less stayed strong over time, it has transformed from an ideological and natural affinity to a transactional affinity.

Moreover, India views Moscow's growing friendship with Pakistan and China as a disregard of its strategic concerns.

Despite geopolitical-considerations, both countries are indispensable partners, making it counterproductive for them to not engage with each other. The ties are likely to continue strong.

PM's European tour will conclude with a 2-day visit to France. In his visit to France, Modi and French PM Emmanuel Macron are expected to discuss co-operation on multiple areas including counter-terrorism and carrying forward the International Solar Alliance.